Watch the North Carolina roots trio perform "The Once and Future Carpenter." 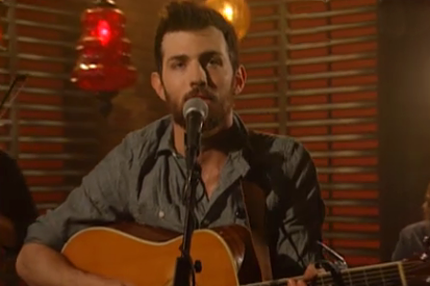 The Avett Brothers have spent the year recording their follow-up to 2009 major label debut I and Love and You with producer Rick Rubin. And while no release date has been announced for the disc, the boys are jonesing to debut their new material. On an episode of CMT’s Unplugged, the North Carolina trio unveiled the strummy new track “The Once and Future Carpenter,” which you can watch here.

The ballad is a stark, Steinbeck-ian travelogue of a blue-collar worker who faces the twilight of his years. “If I live the light I’m given, I won’t be scared to die,” Seth Avett sings, over laid-back acoustic drums and mournful cello lines. Could the new record take on a similarly dark vibe? “We feel like we need to present a current example of where we are, who we are,” Seth said before the performance. “It’s not really acceptable to only present who we’ve been.”

As SPIN previously noted, the Avetts had been holed up in an Asheville, NC studio cooking up new tunes earlier this year, where they wrote more than a dozen tracks. “The number of songs could probably go triple or quadruple that if we want, but sometimes the quality starts to drop with the quantity, so you can’t base it on numbers,” said Scott.

Watch It: The Avett Brothers, “The Once and Future Carpenter”