After getting sidelined with laryngitis, the British soul singer performs first show at London's iTunes Festival. 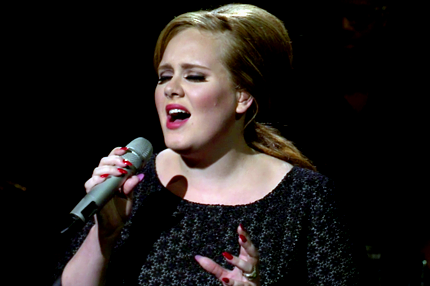 For the last month, Adele has been on medical break due to laryngitis, which forced the British singer to cancel U.S. dates. But the 23-year-old made her return to the stage at the iTunes Festival in London last night. Couldn’t schlep across the pond? Head over to iTunes to watch the entire hour-plus set.

Adele’s 17-song show mixed tracks like “Chasing Pavements” from her breakthrough album 19 with songs from her new smash LP 21, which is the biggest-selling record of 2011 so far. She also delivered a surprise cover of Bonnie Raitt’s 1991 ballad “I Can’t Make You Love Me.” (Raitt’s music is having something of a renaissance lately: Bon Iver has covered that track along with classics like “Nick of Time.) Overall, Adele appears to be in top form despite the medical setback, and while Raitt’s original version is pretty terrific, Adele totally makes it her own with a piano-powered, torchy rendition.

To celebrate the iTunes Festival in London, which runs through July 31, SPIN has a free ten-track download of featured artists. Head here to grab tracks by Neon Trees, Paul Simon, Moby, Mogwai, and more.