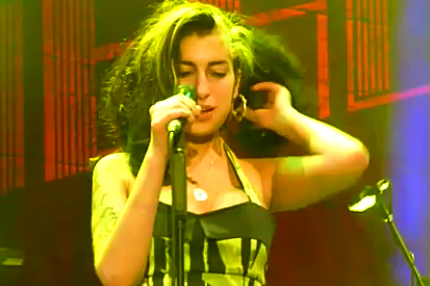 Amy Winehouse marked her return to the stage back in January with a triumphant show at Brazil’s Summer Soul Festival, which seemed to suggest the troubled British soul singer — who has publicly battled addiction and rehab over the years — had beaten her demons.

Here we go again: the 27-year-old singer kicked off a string of European tour dates in Belgrade, Serbia, over the weekend, and the beehive-sporting crooner delivered a disastrous performance that earned rowdy booing from the audience. Check out fan-shot footage here.

During “Addicted,” a bonus track from 2006’s Back to Black, Winehouse barely mustered the energy to sing, opting instead to stand in front of the mic with her arms clutched. The few notes she does eke out, however, were warbly and off-pitch. “Just Friends” was equally awkward: Winehouse even sat down on a monitor to remove her shoes.

It is not clear whether Winehouse, who checked into a London rehab for a week-long stint last month, has relapsed, but she has cancelled two upcoming dates of her tour. “She has agreed with management that she cannot perform to the best of her ability and will return home,” her team said in a statement. “She would like to apologize to fans expecting to see her at the shows but feels that this is the right thing to do.”

Winehouse is still scheduled for a July 8 show in Bilbao, Spain.