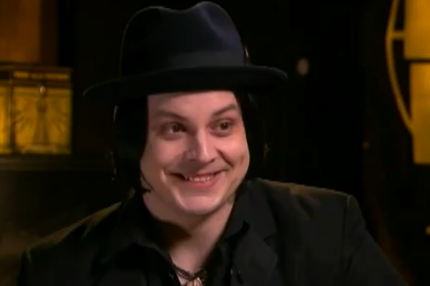 It’s rare for Jack White to sit down for a television interview, but the White Stripes frontman is willing to make a concession when Stephen Colbert calls. On last night’s episode of The Colbert Report, the host chatted with singer-guitarist as part of his music-themed week, and the resulting interview is one of the funniest things to broadcast on a talk show in months. Check it out here (via The Audio Perv).

In a segment dubbed “Stephen Colbert Presents, 2011: A Rock Odyssey With Jack White,” Colbert travels down to White’s Third Man Records headquarters in Nashville, TN. Evidently, he’s looking to jumpstart his music career — he wants White to help turn him into the next Bob Seger — so who better to assist than the guy who’s running one of the hottest new independent labels?

Of course, the conversation quickly devolves into the absurd, with Colbert prodding White about why he won’t license his music for commercials and the brilliance of Seger’s catalog. Surprisingly, White, for the most part, willingly plays along with Colbert’s silliness. Best part: seeing the two turn the Stripes’ “Seven Nation Army” into a jingle for a yogurt commercial.

As an added bonus, Colbert had Florence + the Machine on last night as his musical guest; check out the British pop star performing her single “Cosmic Love” below.Part two of White and Colbert’s conversation continues tonight on The Colbert Report at 11:30 P.M. EST on Comedy Central.

Watch It: Jack White on The Colbert Report

Watch It: Florence and the Machine, “Cosmic Love”