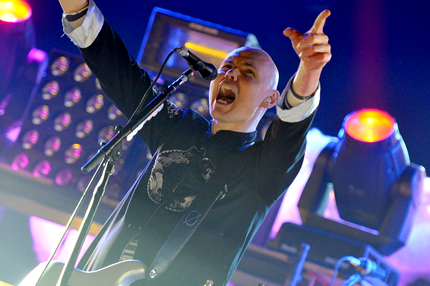 Smashing Pumpkins are known for their gorgeous, and often a little weird, music videos — their clips for “Today,” “1979,” “Tonight, Tonight,” and “Zero” helped define MTV’s mid-’90s glory days. And Billy Corgan hasn’t given up his visual ambitions. His reunited alt-rock band just released a 12-minute short film for “Owata,” a track from their 44-track project Teargarden By Kaleidyscope — and it’s all about female professional wrestling. Watch below!

For the short film. Corgan — a fan of professional wrestling, who often posts about it on his Twitter account — teams with director Robby Starbuck to provide a behind-the-scenes look at the personal and professional lives of female wrestlers, played by real-life ring ladies Cheerleader Melissa and Shelly Martinez, plus an appearance by Scott “Raven” Levy of Juggalo Championship Wrestling, who plays the girls’ trainer.

As the catchy song fades in and out, we watch them train, argue in their dressing rooms, and blow off steam at the bar. Then, of course, we watch one muscular lady totally body slam the other in the ring!

The video is just the latest oddball visual offering from the Pumpkins. NBA Hall of Famer Kareem Abdul-Jabbar recently released a shot clip where he dunks a pumpkin in honor of the Chicago-born rockers. Watch it here.