The Detroit rapper celebrates a No. 1 release with Eminem at a sold-out performance. 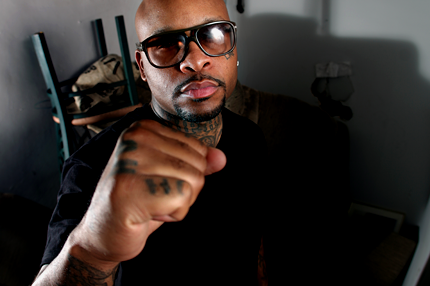 Three years ago, Royce da 5’9″ couldn’t imagine sharing a number one album with Eminem (as the duo Bad Meets Evil). Because just three years ago, Royce was serving time for a “whack ass DUI” that seemed to deal a final blow to the deflating career of the Detroit indie rapper.

“There was a time in Detroit when it was pretty popular to hate me,” explains Royce.

You wouldn’t be able to tell from the line of fans wrapped around the Emerald Theatre just outside of Detroit for a special celebration show Thursday night. The sold-out crowd was bubbling over in anticipation, submitting a slew of local opening acts (an astonishing nine in total) to waves of “we want Royce!” chants throughout the night.

Royce didn’t waste the opportunity, bringing a light and energetic feeling to a 45-minute set that pulled heavily from both his solo career and his time with Slaughterhouse, the hip-hop supergroup featuring Joe Budden and Crooked I that signed last year to Eminem’s Shady Records.

“I want to take you back to where it all started for me,” Royce told the crowd before launching into “Boom,” the 2002 single that helped place him on the mainstream map. Detroit hip-hop veterans, like a Patron-swirling Mr. Porter, Marv Won, and Trick Trick were on hand to ring in the occasion.

As last call loomed in the distance, Royce worked his way through a handful of tracks from Hell: The Sequel, the debut Bad Meets Evil EP — with Royce representing Bad to Eminem’s Evil. After blasting through his verses on “Echoes” and “Above the Law,” the crowd was brought to a rumor-filled frenzy, hoping that Eminem would emerge to join Royce on hit singles “Fast Lane” and “Lighters.” But alas, Eminem was not in the building.

“It all still seems like a dream,” says Royce backstage. “I really thought it was all over.”

No matter how surreal this second chance seems, it comes as no surprise. Hell: The Sequel sits comfortably atop the charts, moving more than 171,000 units in just more than a week. It’s a major milestone in Royce’s career — who has never had a chart-topping album — and more proof that Eminem’s decade of dominance isn’t quite over.

While the origins of Bad Meets Evil reach back to 1999 and Eminem’s Slim Shady LP, the eventual collaboration and subsequent release wasn’t inevitable. The duo hadn’t spoken in years, the result of a heated hip-hop beef between Royce and D12 over a misinterpreted rap on a mixtape.

“I didn’t think we would talk again let alone work together on a project,” explains Royce.

Once D12 and Royce resolved their issues, it didn’t take long for Eminem and Royce to link back up. Their chemistry quickly returned.”Me and Em think alike,” Royce says. “A lot of times, I almost feel like we’re the same person — our sarcastic sense of humor, our views on hip-hop. We just clicked.”

Royce plans on riding the momentum of Bad Meets Evil’s success with the August release of solo effort Success Is Certain.

“I plan on keeping myself so busy that no one will even be worried about me getting into trouble,” says Royce. “Once I get my license back, I’m pretty sure everyone in my camp will be worried because I’ll be back driving sports cars. But those are the types of problems I’m trying have this time around (laughs).”

Ryan Patrick Hooper
Tags: eminem, Royce da 5'9, We Were There