Robyn Leads a Bonnaroo Lovefest on Her B-Day

The Swedish pixie ramps up the energy and wins hearts on the fest's final day. 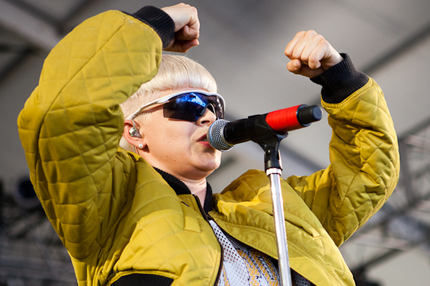 Anyone who spied Swedish electro-pop diva Robyn backstage in the dusty gravel parking lot at the Other Tent on Sunday afternoon got a serious glimpse into what would soon transpire onstage. A small crew huddled (including one topless lass adorned with glitter sprinkles) and put on wireless headphones apparently transmitting the same song, while Robyn ran them through a giddy dance workout that nodded to Bonnaroo’s popular “silent disco” DJ tent and rivaled the eccentric focus of any pre-show ritual dreamed up by Al Pacino.

Once she emerged to join her whiteclad three-piece band beneath a stage set of two towering silver pinwheels, that focus revved up to a manically thrilling intensity. Opener “Fembot” set the tone: Robyn’s music, for all its childlike bounce and disco romance, has a ruthless, mechanized efficiency, an evolve-or-die urgency, a sense that you gotta always step up your game to win love’s battles. And a Robyn show takes place on love’s battlefield, where tears dissolve into sweat as the fabulously butch pixie leads by example.

Wearing black bicycle shorts, a loose football jersey, cropped jacket, and oversize shades, Robyn quickly announced that it was her birthday, demanding that we dance furiously to ensure the celebration’s success. In return, she offered a display of nonstop febrile boogie — strutting, skipping, martial-arts punching and kicking, hilarious crotch-thrusting, gyrating with a fierce agenda, executing a figure-skating level spin, even splaying across the bass drum at one point before leaping up to once again exhort the crowd, which in all honesty, was doing a fine job of losing their freaking shit all by themselves.

We fully crossed over from festival frenzy to utter Robyn lovefest during her should’ve-been-massive 2010 single “Dancing On My Own,” the exact epic combo of shuddering Euro-mook techno beats, Girl Group desperation, and ’80s Bon Jovi blaze-of-glory that Lady Gaga so clearly wanted to define Born This Way’s message of tolerance. With Robyn, already one of the gay-friendliest pop stars working (partially due to her often gender-neutral lyrics and supportive public statements), that mélange simply amped up her status. The Bonnaroo crowd seemed fairly evenly mixed between gay and straight fans, not to mention more women pumping fists than at any show all weekend.

“Dancing on My Own” is wracked by vulnerability, as the narrator watches an ex-lover dance with a “new friend,” but Robyn doesn’t linger in that sad place for long. The series of songs that followed was a tough-minded trip: “Don’t Fucking Tell Me What to Do”; “Do You Know (What It Takes),” in which she formally states, “Guarantee unto me that you won’t let me down”; and “Love Kills,” which features the advice of a woman who’s heard all the bullshit and knows she’ll hear plenty more, but is still here to help: “You can seal your dreams when you shield yourself / Till that one kind soul reveals itself.”

Then, after we were all sopping wet and on the verge of delirium from dancing outdoors in a choking dust bowl microwaved by the blinding sun, she shouted: “I’ve got one thing to say! If it’s your girlfriend’s birthday, call her!