How the longtime L.A. band "found a new side of ourselves" on September LP. 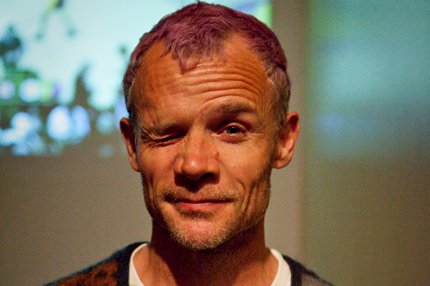 On August 30, Los Angeles’ alt-funk rockers Red Hot Chili Peppers will end a five-year break and return with their 10th studio album, I’m With You. We caught up with bassist Flea to chat about the band’s hiatus, the departure (again!) of longtime guitarist John Frusciante, and how the quartet “found a new side of ourselves” in the process.

It’s been five years since the release of RHCP’s last album, Stadium Arcadium. Did you guys plan for it to be this long?
Yeah. It was planned. I initiated that. I just really needed to get away from [the band]. It had come to a point where it felt dysfunctional and not fun. Even though I felt that we made a good record, played good shows, and honored our position in the rock world, I wanted to get away to give the band a chance to survive. Having time off was really good. I went to school and studied music for a year at USC [University of Southern California], which unlocked a bunch of doors for me in terms of my relationship to music. My time away from the band has really made me appreciate it and also realize how much I love [singer] Anthony [Kiedis]. The dude’s my brother. I realized how much it meant to me to continue playing with him and Red Hot Chili Peppers.

Then guitarist John Frusciante left… for the second time. Why?
It’s not any one thing. He just didn’t want to do [RHCP] anymore. He really wanted to do what he wants to do on his own, without having to deal with the band dynamic, our band dynamic. I’m grateful for the time John was in the band. It was an amazing time. It was a bonding, creative experience and I’m grateful for it.

Is the new album finished?
Yeah, we’re done. It’s been such a big process getting it done and I’m very happy with the body of work. It’s a real dynamic and new thing. We’ve found a new side of ourselves.

How so?
Well, first off, the major difference is that John is no longer in the band and Josh Klinghoffer is now the guitar player. While it’s nice that Josh was already a part of our family, having made records and joined us on our last tour, he’s a very different musician than John. Because of that, the feeling of the music is a lot different. John is a brilliant virtuoso guitar player, who could do whatever he wants on the guitar. It’s unbelievable and I’m so fucking grateful for his contributions to the band. But Josh is a subtler textural player who also plays and writes on a lot of different instruments. He’s not like this Guitar Hero type.

And that’s a total shift from the band’s previous songwriting style…
Right. Before, we wrote by jamming together and Anthony would add his parts afterwards. Now it’s a much different approach. It took some time, for me particularly being so used to the way that John wrote, to understand the way Josh would interact with what I played. It was like, ‘Wait, I thought you were going to come up with that perfect part that interlocks with what I’m doing and boom, it’s going to be done.’ With Josh, it creeps up on you. He sings beautiful background vocals on this record, too.

How did your time studying music change your relationship to the band?
It made for a big difference in me as a writer. I studied chord theory and started playing the piano. So I wrote a lot for the record on piano. Before I wrote for the band mostly on the bass. On the piano I’m writing chord, rhythm, bass, and melody, so it’s a much different input from me. A lot of these songs were translated to a rock band. So we’re starting with a song written on a different instrument, then translating it right away. It’s a huge difference in the creative process and the end product. It has the violent rocking sound and it’s real funky. There are some beautiful, deep songs that can connect to people’s hearts. Anthony is singing about some big issues for human beings.

Like what?
About life and death and betrayal and his relationship to the world. It’s much more poignant than our other records. Life and death is a major theme. [The album] has a deep heart. Everyone in the band has grown and continued to reinvent themselves and become a better musician, and collectively we did. We were forced to.

Did anything happen to push you guys in this direction?
Yeah. The first day that we ever played together with Josh after taking two years off, we found out that a very close friend of all of ours had died. We started jamming and came up with a song that’s on the record, called “Brendan’s Death Song,” about our friend [L.A. punk icon] Brendan Mullen. We improvised and it happened. It was a poignant moment for us. It was an emotional thing.

And that set the tone for the album?
Sort of. We’re the type of band that has ideas about what we want to do and what we’re reaching for, but it’s really about what happens when we get together in the room. It’s about what will organically grow from who we are at the time.

I hear the album is also inspired by African music.
Definitely. We’ve always all loved African music. Throughout our career we’ve played some African bits, but we never really captured it right. Josh and I tripped around Ethiopia with a group called Africa Express, which Damon Albarn [Blur, Gorillaz] organized. We saw music every night and jammed with musicians. Ethiopia is such a great country, beautiful place. So there are a couple African parts on the new songs. One is called “Take Me Home,” which has a real African feeling, and there’s another called “Ethiopia.” I’m really grateful to Damon for bringing me along. It really widened my scope of humanity.

I think that picture of Ethiopia is different from how a lot of people imagine it…
All I knew about Ethiopia was from a few records that I like, as well as what I read about the famine. But you get there and it’s another world. It’s filled with art and music and poetry and intellectuals and writers — all kinds of people. I went to this town called Harar and there is a Mosque and a Christian church right next to each other, and everyone gets along. They’re devout about their faith, but they’re really tolerant. I was walking down the street with this Ethiopian dude, and he’s like, ‘Oh fuck, dude, I gotta take a shit,’ so he just walked up to a random door in this neighborhood, and the residents were like, ‘Come right in and use my bathroom.’ They don’t do that shit in L.A., man. ‘Excuse me, Arnold Schwarzenegger, can I take a shit at your house?’

Speaking of weird shit, you recently ran a marathon. That sounds painful.
[Laughs] I did that to raise money for my non-profit music school, the Silverlake Conservatory of Music. It costs a bunch of money to run, so I’m always trying to raise dough. And I read this book called Born to Run and it got me excited about running, and I had never been a runner before. I trained up and ran the marathon — and it was awesome. The training was fun and running the marathon was a fucking cathartic, beautiful experience. It was tough, but I like tough! I mean, I’m kind of a pussy as a guy, I’ve never been in a fight or anything, so not tough like that. But I like pushing my body. I pushed it too hard a couple times and injured myself. But after running for a while things really start to open up in your body. I felt like I’d tapped into parts of my body that I hadn’t before. I let things in the universe flow through me that opened me up in a really cool way. It was pouring rain during the whole race — it was freezing. But it was a blast. If I weren’t gearing up for the tour right now, I’d be training for another one.

Do you listen to music while you’re training?
Never. I don’t like it. It’s like my senses are so overwhelmed already, so full. The sound of my heartbeat, my footsteps, running up in this canyon here in Malibu, the birds, the animals, the sights, it’s so much already. It’s a beautiful thing.