Hear another track from the pop star's forthcoming album '4,' produced by Kanye West. 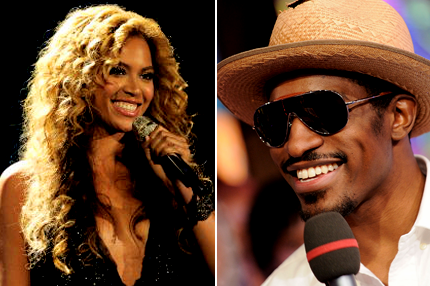 On her forthcoming album, 4, Beyoncé managed to snag a guest appearance from OutKast’s André 3000 for a track titled “Party.” Aside from sporadic collaborations with Ke$ha on her “Sleazy (Remix)” and Ciara’s “Ride (Remix),” the Atlanta rapper has been reclusive, so the pairing is something of a score.

“Party” has just leaked in advance of 4’s June 28 street date; head over to Nah Right to hear it, or stream below.

As an added bonus, “Party” was produced by Kanye West and Consequence, and the pair work up a slinky groove that’s reminiscent of Prince in his ’80s prime, with chintzy synth melodies, quietly funked-out bass, and a hot 808-style beat. Of course, it’s Beyoncé and Dré who steal the show. B brings multi-tracked vocal fireworks — “We like to partayyyyy!” — while Dré proves his trademark drawl and space-aged rhyming skills are still in top form.

Best moment: when the dapper MC stretches a simple lyric — “Always sung this song / I’m the wrong / Off the rip / ‘Cause of him, all of them, will remember the men” — into a multi-syllabic tongue twister.