The Alabama-bred rapper on Hank Williams, Jr., Married With Children, and shopping for socks. 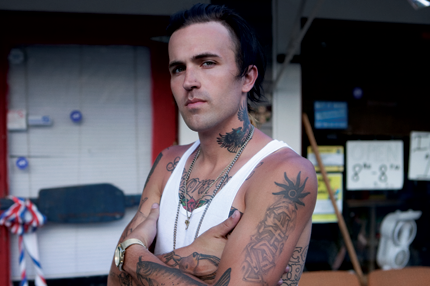 This week: Yelawolf, the stage name of 31-year-old Southern rapper Michael Wayne Atha, who broke out with his 2010 mixtape Trunk Muzik and will release his debut full-length, Radioactive, this summer.

FAVORITE SONG:
“‘Country Boy Can Survive’ by Hank Williams, Jr. It’s a great song that proves that there’s a lot of pride in those from the south.”

FAVORITE NEW ARTIST:
“Atlanta’s Rittz. He’s such an incredible rapper. It makes me proud to see his progression and to know things are just beginning for him. White Jesus was a fucking great mixtape.”

FAVORITE TV SHOW:
“Married With Children. You can’t go wrong with Al Bundy going at it with Marcy Darcy.”

FAVORITE MOVIE:
“Walk Hard about Dewey Cox. It was a very funny spoof of Walk The Line.”

FAVORITE GADGET:
“iPhone, hands down. Earlier this year I had a BlackBerry before I got my iPhone, but it hasn’t let me down. You can do so much with it!“

FAVORITE KEEPSAKE:
“A blown-up print of the cover of XXL magazine’s March issue with Eminem, Slaugterhouse, and myself. That was an epic moment in my life.”

FAVORITE ESSENTIAL ITEM FOR TOURING:
“Socks, socks, socks. I will literally walk out my hotel to a corner store to buy new socks while on the road.”

FAVORITE PLACE TO ESCAPE:
“If I told you that, the you could find me. So what’s the point?”

FAVORITE LIE:
“I was drunk!”