The frontman on green tea-flavored ice cream, iPads, and his pet bulldog. 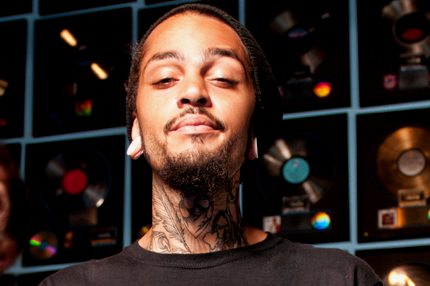 This week: Travie McCoy, solo artist and frontman for New York City’s Gym Class Heroes, who are working on their next studio album, The Papercut Chronicles II, due out this fall. The band will also be performing on the Warped Tour this summer.

FAVORITE RECORD STORE:
“Area Records in Geneva, NY. I bought my first cassette here. It was the first Batman soundtrack, which was entirely written and performed by Prince.”

FAVORITE WEBSITE:
“Traviesblog.com. I can talk all the shit I want with no remorse or comments from people who disagree. Haha! [that’s in the voice of Nelson from The Simpsons]”

FAVORITE FOOD:
“Green tea-flavored ice cream.I’m pretty new to it — but I can’t get enough!”

FAVORITE GADGET:
“iPad2. It’s my new best friend. It’s lighter than my MacBook, but capable of a lot of the same shit.”

FAVORITE STORE:
“Big Fun Toy Store in Cleveland, OH.I dig Kidrobot and some of the new toys that have come out over the years, but Big Fun is like hopping in the DeLorean, flooring it to 88 mph, and finding yourself in your bedroom as a child with all the toys you had when you were a wee lad.”

FAVORITE DRUG:
“Love. I’ve experimented with almost every other documented drug, but this one has the most potent high and you won’t end up in rehab for over indulging.”

FAVORITE PET:
“My French Bulldog, Stitch. He always listens, knows when I’m down and cuddles with me, and actually introduced me to love. I guess you can call him my pusher.”

Wanna Be a ‘Billionaire’: Bruno Mars and Travie McCoy Sued Over Copyright

Jack White and Whiskey: The Head and the Heart’s Must-Haves