Metallica Team With Lou Reed for Next Album

The thrash-metal kings' next record will be full-blown collaboration with the rock legend. 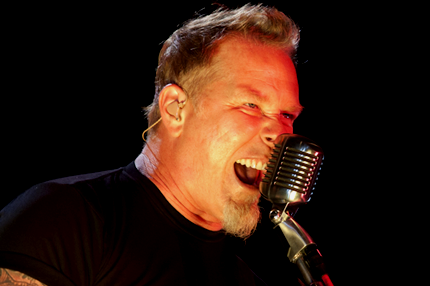 Metallica guitarist Kirk Hammett hinted back in February that the thrash-metal kings’ next release would not be a “100 percent Metallica record,” leading fans to suggest it could be anything from rap-metal crossover to a collaboration with a big-name artist. The band finally revealed the details of that project Wednesday night on their website: their next set will be a full-blown collaborative album with rock idol Lou Reed.

Metallica didn’t reveal many details about the project – there is no release date or title – but they did say that the LP will include ten tracks, and that the sessions (which took place in the band’s California studio) were recorded with “lightning speed for a Metallica-related project.”

“A true innovator and easily one of the most influential songwriters, musicians, and performers in rock music history, Lou’s work with the Velvet Underground and as a solo artist has such an enduring quality that he has long been revered and respected by us and many of our peers,” they wrote.

The collaboration between the metal kings and the rock’n’roll pioneer shouldn’t come as a total surprise: they performed together at the 2009 Rock’n’Roll Hall of Fame concerts at New York’s Madison Square Garden, delivering an electric version of Velvet Underground’s “Sweet Jane.” Check out that footage here.