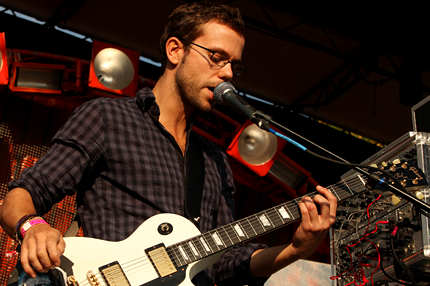 On 2008’s Saturdays = Youth, M83 mastermind Anthony Gonzalez crafted a gorgeous, nostalgia-steeped ode to 1980s pop culture, the era when John Hughes movies dominated the box office and bands like Simple Minds and Duran Duran were everywhere on the radio. It was the group’s most commercially and critically successful album – a radical departure from the spacey, atmospheric sound collages of previous discs like 2005’s Before the Dawn Heals Us.

Now Gonzalez, who recently relocated from Antibes, France, to Los Angeles, is gearing up for his comeback and the band’s forthcoming set (slated for October) looks to be their most expansive yet.

“It’s a double album,” Gonzalez tells SPIN, adding that it will have a conceptual element. “It’s mainly about dreams, how every one is different, how you dream differently when you’re a kid, a teenager, or an adult. I’m really proud of it. If you’re doing a very long album, all the songs need to be different and I think I’ve done that with this one. Overall, it’s pop – and very epic. Anyone who loved M83 before, they’ll love this album even more. People that hated me, they’re going to hate this, too.”

Sonically, Gonzalez says he’s splitting the difference between the slick, synth-pop of Saturdays and the more ambient work of Before the Dawn. Short interludes will be interspersed among longer tracks, and Gonzalez is testing out new instruments like acoustic guitar. He hasn’t quite nailed down song or album titles yet – Gonzalez just wrapped up mixing the album two weeks ago – but he does reveal that guests will include Zola Jesus and Brad Laner from Medicine, the cult noise-pop band who were once signed to Rick Rubin’s American Recordings in the ’90s. Beck and Nine Inch Nails’ bassist Justin Meldal-Johnsen is also contributing.

“The track that Brad sings on is just gorgeous – he did incredible work on that,” says Gonzalez. “And Zola’s track is very orchestral and very big. It’s almost like a duet.”

Gonzalez’ singing partner and keyboardist Morgan Kibby delivered many of Saturday’s highlights – her feathery soprano offered a nice contrast to Gonzalez’ dense, atmospheric squalls. This time around, Kibby has dialed down her contributions, although she did co-write lyrics and sings back-up. “We’re best friends,” says Gonzalez. “And she’ll be on tour with me again, it’s just I want every album to be a bit different.” Gonzalez also adds that’s he grown confident as a singer, after touring relentlessly behind Saturdays. “All the vocals on older records was very quiet and whispery,” he says. “This time, I feel more like a singer, even if I’m not a great singer. There’s so much improvement in my vocals. People will be surprised.”

After his move to Los Angeles, Gonzalez is angling to do more soundtrack work, once promotion and touring for the new album wraps up, and he’s recently teamed with an agent to start seeking out projects. (He’d prefer to forget about his work on the French movie L’Autre Monde (Black Heaven), which he told Pitchfork was a “shitty soundtrack” for a “shitty movie.”) “I don’t have anything now, but I have some cool projects, although I can’t really say anything about them yet,” he says.