Lil B: The Human Meme

He's provocative, prolific, and boasts a following a cult leader would envy -- no rapper's success is more distinctly 2011 than this guy's. 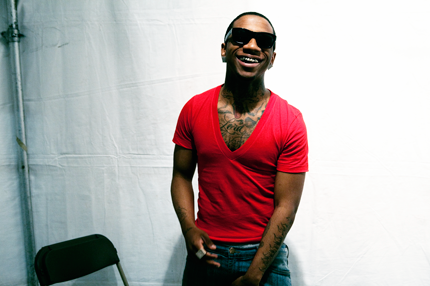 He’s provocative, prolific, and boasts a following a cult leader would envy — no rapper’s success is more distinctly 2011 than this guy’s.

“He can’t rap for shit,” scoffs a white girl seemingly dressed head to toe in Urban Outfitters, standing in front of Philadelphia’s Theater of the Living Arts.

A performance inside by rapper Lil B is well underway, but outside there’s an active, opportunistic scene. Members of a local rap crew wander around with cameras, passing out T-shirts and CDs. Another Urban Outfitted girl dispenses flyers for an “after-party” down the block. A dreadlocked dude later informs the exiting masses that Lil B will attend the after-party. This turns out to be untrue.

Everybody here wants something from Lil B, now one of hip-hop’s best-known figures, thanks almost entirely to the Internet. I want an interview (via Twitter direct messages and phone calls, I’ve been promised one “after the show”). Others hope to generate content they can tag “Lil B” and increase their blogs’ page views. His fans expect autographs and face time. They will tweet during the concert in hopes that he’ll anoint them with a retweet.

Brandon “Lil B” McCartney, 23, began his career with Bay Area skate-rap group the Pack, whose hypnotic, sneaker-cele- brating novelty song “Vans” became a 2006 hit. But the Pack’s profile soon dipped, which led to Lil B experimenting. Rambling and occasionally rhyming in a manner that he calls “Based freestyling,” he has distributed his abundant recorded output across more than 130 MySpace pages. He uploads entire albums to the Web and claims to have released nearly 2,000 songs since 2008, most of them free downloads. The awesomely inane club track “Wonton Soup” (“Then I park my car?/ Then I fuck your bitch / Eat that wonton soup / Wet like wonton soup”) gets regular play on MTV Jams. He isn’t on a label, yet there isn’t a rapper, hard-as-nails or pop-friendly, who isn’t hip to him.

Back at the Philly show, bouncers carry a young black girl out of the venue. She’s kicking and yelling. Some in the crowd chant “World Star” in reference to WorldStarHipHop, the website that hosts thousands of videos of ugly scenes just like this. Others aim iPhones at the squabble. One kid walks in front of the fight, licks his lips, and begins turning his wrist and slightly grooving. He’s doing the “cooking dance,” a variation on a move that’s been in clubs for years but is now credited as an invention of the self-proclaimed “Based God.” A young girl wilding out at a Lil B show has viral potential. A guy “cooking” in front of the action has even more.

The day before, Osama bin Laden had been killed. When Fox News rushed to the White House to cover the celebrations, someone shouted, “Thank you, Based God!” live on air. That night, Lil B tweeted (typos intact): “just because they say osama is dead dosent mean thats a good thing osama has family to that probably loves him a lot as well.” Like everything Lil B does, the tweet was daring and scrambled and naive, but it was mostly another way to keep people talking about Lil B. He once tweeted that if Kanye West didn’t acknowledge him on Twitter or collaborate with him, Lil B would “fuck him in the ass.” Months later, he announced that his next album will be called I’m Gay.

Fans now pour out of the Philly show. Most are dressed like Lil B (skinny jeans, tight T-shirts, Vans), but there are eccen-trics too. A chubby dude with a huge blue mohawk. Another guy in a chef’s apron splattered with the Los Angeles Lakers logo. A duo sport matching homemade Lil B shirts with I’M GAY written on the back. These are Lil B’s people: A bigger-than-hip-hop cult who embrace his music, but also his vaguely positive “Based” philosophy. B tweets messages like, IF YOUR READING THIS I WANT YOU TO KNOW YOU ARE A SPECIAL PERSON AND AMAZING, and he even wrote a small-press self-help book called Takin’ Over by Imposing the Positive.

Lil B’s entourage departs at 12:45 A.M. He’s spent an hour and a half after the show meeting with his followers. An interview never happens. A handler tells me he’s “too tired.” We arrange a phone interview, but Lil B’s management never follows through. They’re probably overwhelmed, since the Philly date was the last in a week of shows, part of a Live Nation deal. Lil B has received death threats because of I’m Gay, and GLAAD weighed in, hoping that the title was “a sincere attempt to be an ally.” Lil B is now pursued by the media, mostly because he’s got 200,000-plus Twitter followers who will click on anything that mentions him.

A few weeks before Philly, I attended a Yelawolf show at New Jersey’s Rutgers University and stopped in the student-center restroom. Taking my seat on the toilet, I noticed the phrase EAT THAT WONTON SOUP scrawled on the stall door. The Lil B cult was far more vivid in that moment than it was in Philly. What other rapper can get college kids to graffiti messages in bathrooms in 2011 as if they were ’90s middle-schoolers drawing Wu-Tang symbols? I also noticed something else written on the stall’s wall — the lyrics to Rebecca Black’s Internet smash “Friday.” “This makes perfect sense,” I thought. Then I flushed.