Dave Grohl and co. prove that you don't have to be a heartthrob vampire to score big at the annual show. 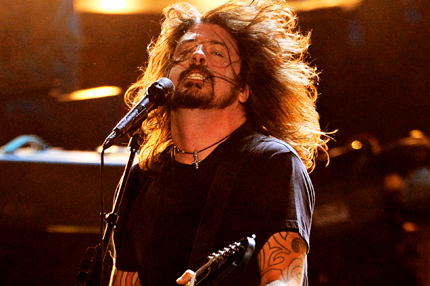 At Sunday night’s MTV Movie Awards, the Twilight cast took home trophy after trophy for Eclipse — with Robert Pattinson jumping offstage for a squeal-garnering smooch with co-star Taylor Lautner — but it was the Foo Fighters’ hard-rocking performance of “Walk” that stole the show.

After a hilarious intro by Movie Awards staple Jim Carrey, who donned a green-screen suit that displayed video of dogs humping and other oddball imagery, Dave Grohl and company uncorked an earnest take of the slow-building, anthemic cut from the excellent Wasting Light. Celebs Emma Watson and Amanda Seyfried rocked out in the audience.