Watch Wayne Coyne lead troupe through chilling version of "Do You Realize??" from their sunrise show in a California graveyard. 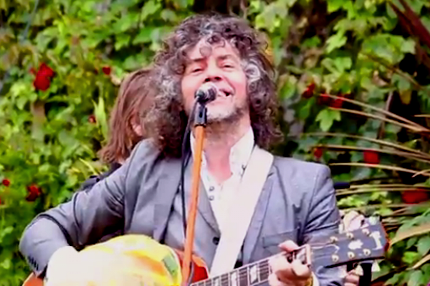 It was one of the Flaming Lips’ most unconventional shows in years: a two-night stand at California’s Hollywood Forever Cemetery, the final resting place for Dee Dee and Johnny Ramone, among others. Of course, Wayne Coyne and Co. brought plenty of weirdness – they erected a sonic shrine dubbed the “Trip-oleum” on the grounds – to their June 14-15 stand. But the highlight of the event (which featured full performances of The Soft Bulletin and Pink Floyd’s Dark Side of the Moon) was a sunrise performance of the group’s classic “Do You Realize??” featuring back-up from Edward Sharpe and the Magnetic Zeros. Check out footage here.

The Lips’ 2002 classic gets pared down from a sprawling psychedelic rocker into a gorgeous acoustic ballad, and the Zeros add nice harmonies and ominous sounds of tolling cathedral bells. Wayne Coyne’s vocals sound slightly cracked – it was 6 AM after all – but there’s no denying the creepy factor when they all sing in unison, “Do you realize that everyone you know someday will die?” amidst all the buried bodies.

WATCH: The Flaming Lips (feat. Edward Sharpe and the Magnetic Zeros), “Do You Realize??”