Canadian hard rockers bring anarchy to the classroom in clip for "Queen of Hearts." 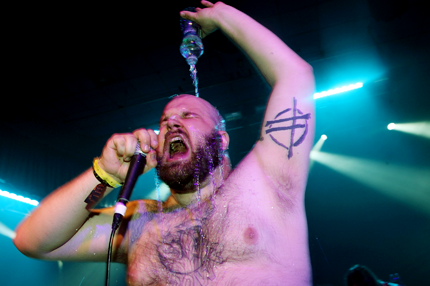 Fucked Up’s latest album David Comes to Life is the group’s most ambitious set yet — an 80-minute rock opera with a twisted plot about a factory drone and his soulmate. The Canadian rockers have just debuted the album’s first video, for the song “Queen of Hearts” — but don’t expect it to spell out any of the record’s complicated storyline. Watch it here.

Scott Cudmore — who’s directed videos by Sloan, Timber Timbre, and the Hidden Cameras — helms this clip, which splits the difference between the adorable kids from Staten Island’s PS22 Children’s Choir and the disaffected school children of Pink Floyd’s classic “Another Brick in the Wall, Part 2″ video. The gist: a schoolmarm straight out of Little House on the Prairie leads her students through a shouting war that’s set to the track.

But like Floyd’s convoluted tale, the video raises more questions than it answers: what’s up with the anachronistic use of a boombox? Why is there a full film crew? And who is that weird bearded dude?

WATCH: Fucked Up, “Queen of Hearts”