Hear "This Is All Now" from the grown-up and reunited emo innovators. 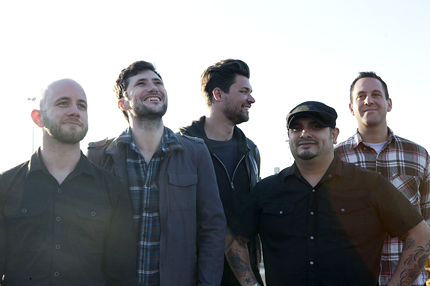 After surprising their fans by reassembling their early-’00s lineup that recorded their biggest and best album, Tell All Your Friends, Long Island rockers Taking Back Sunday have wrapped their self-titled comeback LP, due out June 28. Hear the exclusive premiere of the track “This Is All Now” below.

Beginning with hushed vocals from singer Adam Lazzara and Mark O’Connell’s restrained drum pattern recorded on a tiny kit, the song explodes into a fury of crunching guitars, call and response melodies, and bruised, introspective lyrics. “This is all I ever ask from you / The only thing you couldn’t do / Tell me the whole truth,” sings Lazzara in the song’s monster chorus.

“The lyrics went through three or four different drafts, just to get everything straight and make sure that we were getting our idea across,” Lazzara tells SPIN. “There’s a couple lines in that song that are definitely a little uncomfortable to sing.”

O’Connell crafted the original chord progression to the band, newly back-in-the-fold vocalist-guitarist John Nolan wrote the melody for the chorus, and Lazzara brought it to life with his throat-searing vocal delivery.

Though it’s tempting to interpret some of the lyrics as pieces of inter-band psychoanalysis — particularly exchanges like “Next time you’re standing on that stage / You’re lying to yourself!”– Lazzara says the song isn’t about any group drama between him and Nolan. “It’s not so much our relationship as it’s about our relationship with faith and growing up in and out of the church and everything like that,” he says. “Seeing that some of those lines are so harsh, it was good to get that out and it makes for a really personal tune for the both of us.”

The track is available as a downloadable EP tomorrow (June 7). The band will hit the road with punk mainstays Thursday for a tour that begins June 14 in Denver, CO and ends on July 31 in Chicago, IL.See all dates here.

LISTEN: Taking Back Sunday, “This Is All Now”