Download the rollicking track "Just as Lost as You" from British rockers' seventh album. 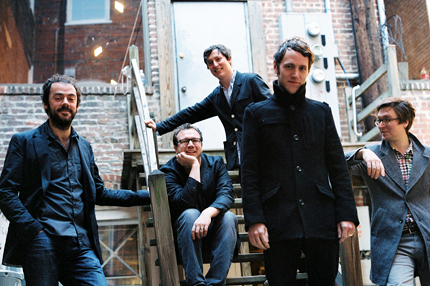 For their seventh album Whatever’s on Your Mind, British rockers Gomez took a radically different approach to recording: They stashed demos in a digital locker and allowed each member to work on the album’s 10 songs individually.

While part of the reason was practical – frontman Ian Ball lives in Los Angeles, drummer Olly Peacock spends his time in New York, while Ben Ottewell, Tom Gray, and Paul Blackburn reside in Brighton, England – Gomez have also discovered that fourteen years into their career, they work better on their own.

“It’s just easier to dump everything into a big bucket in the sky,” Ball tells SPIN, referring to cloud-based computing. “We all have different musical interests, and working solo just takes taste out of the equation.”

You can hear the group’s newfound approach on the album’s standout track “Just as Lost as You,” which SPIN is offering as an exclusive download here, along with a first look at a video for the tune. (The album hits stores on June 21.)

Peacock wrote the initial version of the song with a verse and “a bridgy chorus thing,” but once Ball got his hands the demo, he added the track’s glistening central hook and melody. “There was no, ‘But I really liked that verse!'” says Ball. “No whining, no moaning. No one cared if things got changed.”

So what about the early versions of Whatever’s on Your Mind’s tracks? Ball says the band will release those for fans who pre-order the album. “It’s basically the entire album in different form,” he says. “It’s a really good listen.”