EXCLUSIVE: First Against Me! Song With New Lineup

Hear the Florida punks' "Russian Spies," one of the final recordings made in Butch Vig's Wisconsin studio. 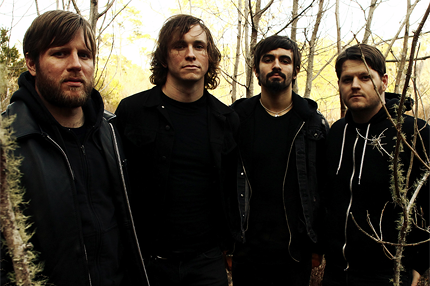 Against Me! are back with their first new songs since last year’s White Crosses, and both are sure to please fans of the Florida band’s politically charged punk rock. Stream “Russian Spies” here.

The song is the A-side of the band’s new 7-inch single due out June 14 (the B-side is called “Occult Enemies”) and the tunes mark the studio debut of new drummer Jay Weinberg, son of the E Street Band’s Max Weinberg. They’re also among the last songs tracked at Smart Studios, the now-closed Madison, Wisconsin, home base of Butch Vig, who produced Against Me!’s last two albums, White Crosses and New Wave, SPIN’s 2007 Album of the Year.

“We had a break between tours this past February that left us nowhere near Florida,” frontman Tom Gabel tells SPIN. “When I realized that we were going to be close to Madison, though, I gave Butch a call to see if there was any way we could go into Smart Studios to record a couple of songs that I had in my pocket. I knew that Smart was closed to the public but that most of the gear was still there. I wanted to have the chance to record there before it was gone for good. Butch was cool enough to help make it happen.”

The band’s sessions at Smart overlapped with massive protests taking place in Madison this past February at the State Capitol, with thousands gathering to speak out against legislation that rendered labor unions effectively powerless.

“As we were recording, the capital was erupting just down the street from us which I think only helped add to the immediacy of the songs,” says Gabel. “‘Russian Spies’ is a song about existential dread, narcotic submarines, oil spills, and the now almost distant memory of a red threat. In this brave new world, sometimes I find myself longing for enemies so simple.”

The single will be released via Sabot Productions, the imprint founded by their manager, on both black and yellow vinyl, and all purchases come with a digital download link as well. It’s also the first release available through Total Treble, the band’s just-formed record label, on which all future Against Me! music will be released. Click here to order.

Against Me!’s current tour stops tonight at NYC’s Webster Hall and continues through June 21 in Minneapolis, and they’ll begin a stint at this summer’s Vans Warped Tour on June 24 in Dallas.

LISTEN: Against Me!, “Russian Spies”