In their native England, they're bona fide stars who have been around for two decades. They may never reach those heights here, but they don't need to. 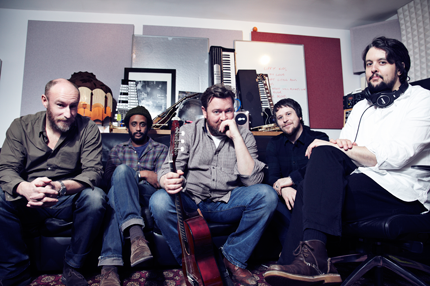 In their native England, they’re bona fide stars who have been around for two decades. They may never reach those heights here, but they don’t need to.

Last time Elbow played their hometown of Manchester, England, they did it before a sold-out crowd of 20,000. But here in the States, they are the definition of a cult band — routinely overshadowed by the similarly moody and anthemic Coldplay and Radiohead. Their just-released fifth album may not necessarily change that, but Build a Rocket Boys! is the group’s most uplifting yet, and while the band recently played at Coachella to their biggest U.S. audience yet, Elbow are at peace with the idea that their success may be tied to geography.

“As long as people are listening,” says genial frontman Guy Garvey, 37, “that’s all that matters.”

SPIN: It has been 20 years since you formed. Is there any band whose career arc you would like to emulate?

GUY GARVEY: Maybe Radiohead and R.E.M. Even a group like the National — artists who have crossed over without compromising. It’s a special thing.

SPIN: Older songs like “One Day Like This” have been blanketed in TV promos in the U.K. Were any tracks from your new album written with crossover intent?

GARVEY: “Open Arms.” I remember sitting on the edge of my bed to write that one. I had just woken up and was in my boxer shorts with a Dictaphone — a beautiful sight, really. [Laughs] I told myself, “Write a song that replaces fuckin’ ‘My Way’? at Catholic weddings in the north of England.” It’s such a pigheaded lyric. And all these big bleary-eyed drunks will sing it at Catholic weddings in North England. “Open Arms” has a lot of unison singing in it. And it works: Grown men will come to our gigs and cry during that one.

SPIN: Twenty years in, do you feel like Elbow is a successful band?

GARVEY: I think we were considered successful even before [2008’s] Seldom Seen Kid because we were living off the band. We have a great manager who keeps our coffers topped off, and we give ourselves a sensible wage with a view to having three fallow years between records. We always make sure we have enough money to make a record and not be pressured time-wise.

SPIN:How do you define success?

GARVEY: If your peers respect your music. John Cale made [Cast of Thousand’s] “Switching Off” one of his desert-island picks. What a mind-fuck! I consider him to be the godfather of alternative music.

SPIN: Elbow don’t tour the States that often, which is how a lot of bands cultivate audiences. Do you have a strategy to win over new fans here?

GARVEY: We’ve had some luck with media syncs in film and on TV. We’d love to do a soundtrack with a really cool director. Most of us have babies and families. I’m still working on it. So it’s difficult for us to tour over here regularly. But, no, we don’t really have a strategy.

SPIN: Your U.K. gigs feature a full-scale production, with lighting rigs, your own sound system, and a string section. Is that not possible to do over here?

GARVEY: To bring our full touring crew over here is about 40 people. We get paid in dollars for our gigs, but since we pay our crew in pounds, it’s really easy to lose a shitload of money. We have to cut back.

SPIN: Build a Rocket Boys! is being hailed as your most upbeat album while previous ones were more introspective. Do you worry much about critical and public reception at this point?

GARVEY: The only thing we’re worried about is if someone decided we weren’t cool. The British press isn’t as vicious as it used to be, and these days it’s sort of cool to care again. Everyone loves an everyman anthem.

SPIN: Do you get recognized here?

GARVEY: Not always, but I remember going foraging for breakfast in St. Louis once. I saw this one girl sitting in front of the venue, and she made this pink T-shirt with a big heart in the middle of it and a misty picture of our guitarist Mark [Potter]. She was so embarrassed when she saw me. And I was trying desperately not to laugh.

SPIN: How about in your hometown?

GARVEY: I’m not David Bowie. Who are we kidding? At the end of the day, I’m the same person I’ve always been. I’m Don Garvey’s son from up the road.
BUY THIS ISSUE
Read the entire July 2011 issue of SPIN, available now for iPad.