In Defense Of Kanye West’s “Monster”

Kanye wants us to consider his controversial video an "art piece." Why he's right, and why we should. 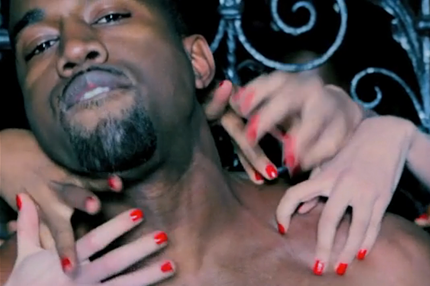 In the video for Kanye West’s “Monster,” Kanye, Rick Ross, Jay-Z, and Nicki Minaj (no Justin Vernon to be found, unfortunately) are holed up in a fancy chateau Salo-style, surrounded by murdered and murderous models. At one point, Kanye casually rhymes while holding a woman’s severed head.

When the video first leaked in January, it understandably generated controversy. Two pieces from Racialicious’ Latoya Peterson titled “Black Women/White Corpses: Kanye’s Racialized Gender Politics,” and “The Ghost Of Bigger Thomas Surfaces In Kanye West’s ‘Monster,'” give you a sense of what’s problematic about the video. An official version has finally arrived, six months after such thinkpieces appeared, and long after “Monster” stomped across rap radio; now, the clip is saddled with a naïve, quasi-fascistic caveat: “The following content is in no way to be interpreted as misogynistic or negative towards any group of people. It is an art piece and shall be taken as such.”

That’s a groaner for sure, but it’s also sincere. “Monster” actually is an “art piece,” and “as such,” it takes more explication than a rap video really should. Kanye, the self-aware, sensitive rapper has crafted a surreal response to hip-hop misogyny making the implicit violence of in-the-club videos, well, extremely explicit. Women tend to pose stoically in rap videos, so here they’re frozen (thanks to rigor mortis) and dolled up without agency. It’s a pitch-black comedy of rap-video excess and though it’s far too much of a primal purge to rise to the level of satire, it’s a knowing provocation. If Kanye were more mature and not still figuring all this stuff out, he’d create some kind of corrective; but he’s lost and awkwardly working his way through it, and as a result, the best he can do is vomit it up something even more horrifying.

One of the most striking things about Kanye’s arrival on MTV in 2004 was how his video clips for The College Dropout skipped past video vixen conventions and exclusively cast black women. This was a low-stakes, yet still aggressive, conscious rapper-like response to the late-’90s/early-2000s era, which often privileged multi-ethnic models, and all too often, had them swarm around a white or light-skinned woman as the focus of attention.

Even “The New Workout Plan,” his most typical rap video, was almost solely populated with black bodies. The only white woman present is Anna Nicole Smith — the blonde, white, middle-class beauty gone grotesque. For Late Registration’s “Touch The Sky,” Kanye cast Pamela Anderson, the blonde bombshell, as his love interest. The video’s sub-narrative features two black women with afros who are disgusted by his relationship with a white woman. Here, Kanye mocked the racial didacticism he’d previously employed, like he realized that his focus only on black women was it’s own kind of exclusion; so, he turns it around, challenging black responses to white beauty.

Then, there’s the clip for Graduation’s “Flashing Lights,” a precursor to “Monster” in its deconstructive approach and use of psycho-sexual horror: Kanye is murdered with a shovel by a buxom vixen in lingerie. It’s as if he’s decided to die for the sins of less sensitive rappers who have previously sprayed random video strippers with champagne, or most notoriously, slid credit cards between women’s butt cheeks (see Nelly’s “Tip Drill”), and then laughed about it with their buddies.

On 808s & Heartbreak, Kanye confronted his own issues with women, recording a stark breakup album and rapping creepy stuff like, “When I grab your neck, I touch your soul.” The video for “Paranoid,” in which Rihanna plays a wraith-like femme fatale out for revenge, and the short film We Were Once A Fairytale, based on the 808s track “See You In My Nightmares,” both surreally mock Kanye’s female troubles and only help to complicate his cruelest album.

These videos were all precedents for “Monster,” but none of those needed a warning. Music critic Eric Harvey called bullshit on the “Monster” disclaimer, referring to it as “a rhetorical out for a powerful coward afraid to stand behind the political implications of his own work.” Harvey’s correct, but that warning is also there because, well, it kind of has to be there. The stakes are too high for someone like Kanye not to cover his ass.

On Wednesday, Zach Baron of The Daily wrote a piece called “Out Of Control” about the recent media-fanned personal crises of Congressman Anthony Weiner and comedian Tracy Morgan. Baron focused on the media’s impulse to construct a “narrative” out of indiscretions while they’re still unfolding, and suggested that the story quickly slips out of the hands of its subject.

Kanye has been the victim of this kind of media impulse before, and he’s well aware of the way that opinion becomes fact, spreads rapidly, and then soon enough, some white tween Taylor Swift fans are calling you a “nigger” on Twitter and you have to tell the public you’re committed to going through rehab.

Imagine the “Monster” video, without its caveat, on a slow news week. If Common can be characterized as a cop-killing rapper and Lil Boosie’s lyrics can be used in a trial that may determine whether he lives or dies, what is there to stop a strident newspaper headline or cleverly edited news segment from presenting Kanye West as some sort of irredeemable, homicidal misogynist?

And once that charge gets thrown out there, it’s not like Kanye is given a media grace period to break down what he intended with the video or that such a self-analysis wouldn’t be chopped up and distorted. Who’s to say Kanye could even begin to explain “Monster”? He probably wouldn’t have to make this video, or album after album about all this stuff if he could just explain it in an interview.