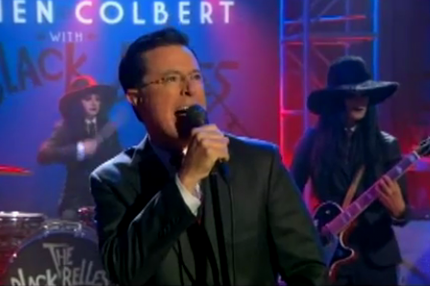 Jack White appeared on The Colbert Report this week for a series of hilarious interviews with Stephen Colbert. The final segment aired Thursday night, and it culminated with Colbert debuting his new single “Charlene II (I’m Over You)” with White’s new signing, the Black Belles. Watch the performances here (via The Audio Perv).

“Charlene II” is a sequel of sorts to Colbert’s “Charlene (I’m Right Behind You),” which he aired on his show all the way back in 2006. Fittingly, the Belles closed out last night’s episode with their own goth-rock rendition of Colbert’s original. (Both tracks are available on iTunes now.)

As an added bonus, Colbert posted outtakes from his White interview on his website, where the two try to “out-Catholic” each other on religious trivia. Ever want to know who the patron saint of clowns is? Watch below.

WATCH: The Black Belles perform on The Colbert Report