How can Colbert reignite his New Wave career? "We should pair you with some real musicians," says White. 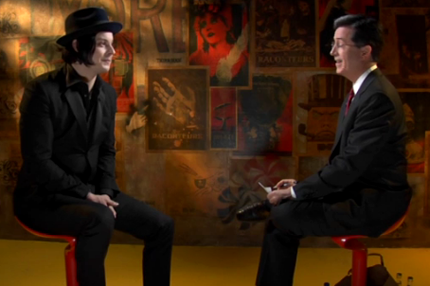 For his music-themed week on The Colbert Report – which has featured guests Florence + the Machine and Talib Kweli – Stephen Colbert sat down with Jack White on Tuesday for a hilarious interview, where the talk show host grilled the White Stripes frontman about Bob Seger and licensing “Seven Nation Army” for yogurt commercials. Colbert aired the second of his three-part interview last night, and the Q&A session is even funnier than the first. Watch it here.

In the interview, Colbert talks about trying to reignite his music career – he claims had a huge hit in the ’80s with his New Wave band for a stalker anthem called “Charlene, I’m Right Behind You.” And the interview-shy rocker manages to serve up a couple of clever barbs at Colbert. When asked how Colbert can restart his career, White responds, “I think we should pair you with [stifles laughter] some real musicians… I think you have a certain je ne sais quoi.”

On tonight’s show: Colbert will premiere his “comeback” song, co-produced by White and featuring guests the Black Belles, his new signing for Third Man Records.