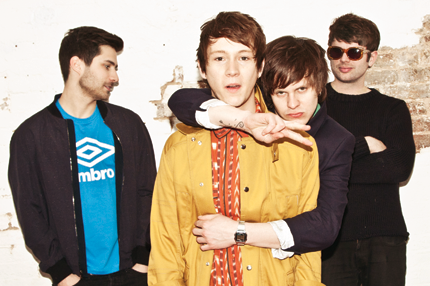 If you want to be heard, you’ve got to make a big noise. That’s been Viva Brother singer-guitarist Lee Newell’s m.o. since the self-styled “gritpop” band formed in dreary Slough, England (the setting for the British version of The Office), in 2009. Whether promising the polarized U.K. press that his stomping quartet are the kind that “take over the world”; telling a crowded Brooklyn club that they’ll soon be playing “Madison Square Gardens [sic]”; or slagging off American A-listers (Kings of Leon have “pandered”), he’s not shy about stirring things up. “We just do what we feel,” says Newell. “Maybe that’s self-destructive, but that’s who we are. We’re not ashamed.”

Newell, 23, bassist Josh Ward, drummer Frank Colucci, both 22, and lead guitarist Sam Jackson, 24, met and started playing together as teenagers. Devotees of Nirvana and the Smiths, the band woodshedded for more than a year before they began gigging in late 2010. Or, more accurately, they barned, using the money they earned working at mind-numbing day jobs to purchase a tiny rehearsal space, determined not to emerge until they’d perfected their distinctly Oasis-y sound. “I suggest ?every band spend time in their little bubble,” says Newell. “It’s how you learn not to give a fuck what people say about you.” Apparently, that’s good ?advice — Viva Brother signed a major ?label deal less than a month after their first London gig last October.

There was at least one unforeseen obstacle, though. The band had to change its name after an obscure Australian Celtic act called Brother complained. Newell and Co. offered to buy the name; the elder band said, “?’No, we want ten times that amount,’?” recalls Newell. “So we said, ‘Go fuck yourself’?” and added the parenthetical.

Not that anyone was likely to confuse the two. A swaggering EP, Fly by Nights, produced by Britpop specialist Stephen Street (the Smiths, Blur), who’d heard the band’s demo, was ?released in April. Street also helmed this month’s full-length debut, Famous First Words (A&M/Octone), which was supported by gigs at Glastonbury ?Festival and on Late Night With David Letterman. A U.S. tour is scheduled for the fall. Beyond that? “I’d like to see us as important as the Clash,” Newell says. If only the boy had some ambition.