Best of Glastonbury: Radiohead, Beyonce, U2

Watch highlights from the massive English festival, also including Coldplay and Pulp. 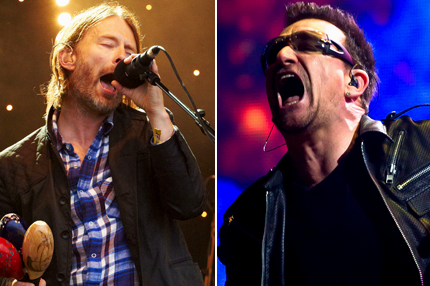 It was an action-filled weekend in rural Somerset, England, for the annual Glastonbury Music and Arts Festival, the world’s largest outdoor music event with more than 100,000 fans.

Highlights included headlining sets from U2, Coldplay, and Beyonce, who recruited British trip-hopper Tricky to guest on “Baby Boy.” The pop diva also covered songs by Alanis Morrissette (“You Oughta Know”), Kings of Leon (“Sex on Fire”), and Prince (“Beautiful Ones”). “A girl, a woman, a young lady has not headlined here for 20 years,” she said of her landmark set. “This is history.”

Radiohead dropped in for a surprise set, as did reformed British alt-rock heroes Pulp, who ran through their ’90s hits to wild applause. Also making the trek to Worthy Farm were legends Paul Simon, B.B. King, and Don McLean, who performed his ’70s classic “American Pie.” Janelle Monae and Mumford & Sons also turned in awesome sets.

Below, watch video highlights from the Glastonbury 2011.