Hear the debut full-length from the whimsical British folk duo. 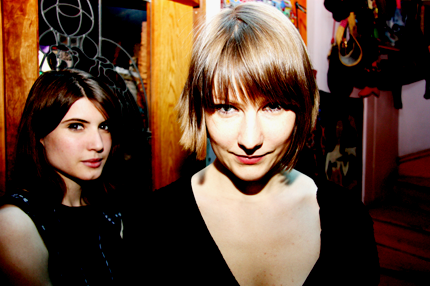 Smoke Fairies are one of England’s hottest up-and-coming folk acts, who’ve been praised by everyone from Jack White and Richard Hawley to new wave pioneer Gary Numan and art-rockers Rasputina. The whimsical duo – Katherine Blamire and Jessica Davies – have released just a handful of singles, including the White-produced 7-inch “Gastown.” But their profile should only rise with this week’s release of their first full-length album Through Low Light and Trees. SPIN has a full stream of the record.

Blamire and Davies met as friends in a Sussex, England, middle school, where they bonded over Crosby, Stills and Nash and the Grateful Dead and dreamed of performing their unique brand of folk-pop for U.S. audiences. A chance encounter with Jack White at a local pub helped the girls score their big break. “We heard he was there, had a couple of whiskeys, and got the courage to give him some of our music,” says Blamire. “A year later, out of the blue, he asked us to support the Dead Weather in London and also asked us if he could work with us and put out a single [via his Third Man Records imprint.] It was quite a chance occurence.”

White’s quick recording style and love for analog technology inspired the Smoke Fairies when it came time to record Through Low Light and Trees: The duo spent 10 days with PJ Harvey collaborator Head, whose racks of old-school equipment helped them achieve an intoxicating, sepia-toned roots sound. But their secret weapon is their gift for crafting ethereal vocal harmonies, particularly on the molasses-slow ballad “Strange Moon Rising.” If Kate Bush and Tori Amos teamed up for an album of American country and folk standards, it’d definitely sound a lot like Through Low Light and Trees.

“Our harmonies are a way for us to interact in the most intense way,” says Blamire. “We’re always trying to play off each other.”

Smoke Fairies will hit the States for a string of headlining shows as well as slots opening for Rasputina. Expect them to bring some of their most intimate performances ever: “We’re coming over as just a duo and not bringing our full band,” says Blamire. “We’re just doing stripped back versions of our songs, mixed in with some old material.” Check out dates below.