Justin Townes Earle, Arcade Fire, Wanda Jackson, and two others make our list. Find out why! 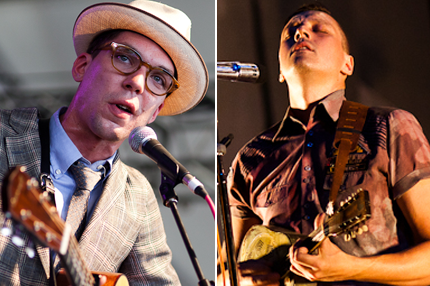 Bonnaroo kicked off in earnest on Friday with My Morning Jacket’s debut set as a headliner on the What Stage, and Lil Wayne’s late-night party at the Which Stage. But there were plenty of other highlights. Here are our Top 5:

JUSTIN TOWNES EARLE AT THE OTHER TENT

As the son of Steve Earle and namesake of Townes Van Zandt, Justin Townes Earle undoubtedly talks a lotta shit in his everyday grind, but onstage Friday he was about as artfully and bluntly honest as any singer-songwriter type you’ll ever encounter. And he did it by playing his part to the hilt — sporting a plaid jacket and tie, Panama hat, khakis, cigarette dangling, looking like a squirrelly ’40s con man in a James Purdy novel who’ll spend all day confessing his colorful sins in a radio-DJ purr, just so you’ll lend him enough scratch to buy two fingers of gin.

There’s a world of mischief dancing behind Earle’s style-conscious nerd glasses and a universe of sly regret in his expressive, if slightly thin voice. When he cracks, “I’ve always been known as a hard dog to keep under the porch… and nothing’s changed,” you feel the timeless exasperation that wandering musicians induce; and when he later half-jokes, “My mama’s probably still sittin’ in a chair in her living room wondering where the fuck I am,” you’re blindsided by a parent’s helpless fear (at one point, Earle admits, “Most people know I take a lot of drugs; try not to, sure like to”).

With the stunningly talented fiddler/singer Amanda Shires and upright bassist Bryn Davies at his side (with an assist from cellist Ben Sollee), Earle fiercely plucked his acoustic guitar and performed songs that moaned, teased, flirted, and snarled. On “Slippin’ and Slidin’,” a sleepy substance-abuse ditty, you could almost, for an instant, see his demons flashing across his narrow, elastic, suddenly contorted face. Then he regrouped and strummed a gently devastating take on the Replacements’ “Can’t Hardly Wait,” perhaps the most affecting too-fucked-up-to-lie lament of the past 30 years. Earle made it seem like a truth he had to share. — CHARLES AARON

ARCADE FIRE AT THE WHAT STAGE

Even for longtime naysayers, it’s hard not to be an Arcade Fire fan these days. Their new album, The Suburbs, is arguably their best yet, winning a Grammy for Album of the Year and wooing critics with its heavy instrumentation and ideas about frontman Win Butler’s upbringing outside Houston. Live, they are indie rock grandness delivered with the zeal of a tribe of four-year-olds let loose in a McDonald’s playpen. It was a thrilling 90 minutes: the eight members banged on pianos, tambourines, violins, and xylophones, and hollered in unison on highlights “Ready to Start,” “Keep the Car Running,” “No Cars Go,” and “Intervention.” Meanwhile, clips from their short film with Spike Jonze played on two massive onstage screens. “Alright you fucking hippies let’s do it,” Butler said, smirking mischievously before launching the punk blaster “Month of May.” On the swaying Caribbean beats of “Haiti” and the open-ended groove of “Sprawl II (Mountain Beyond Mountains),” Regine Chassagne took over on vocals, and twirled with colorful streamers. Communal good vibes abounded, despite the moist heat (even at midnight). “Me and my brother [bandmate Will] grew up in eastern Texas, so it’s nice to feel proper humidity for once,” said Win, wiping his brow between songs. “Trust me, it’s nice. It’s really cold where I live.” That being Montreal. Later he added, “You know, any festival where you can see My Morning Jacket and Lil Wayne is OK with me.” — WILLIAM GOODMAN

WANDA JACKSON AT THE OTHER TENT

For 75 minutes, a few thousand Bonnaroovians were under the spell of one cool grandma: 73-year-old Wanda Jackson, the Queen of Rockabilly who, like the First Lady of Country Loretta Lynn, is experiencing a second act thanks to Jack White. The Party Ain’t Over, Jackson’s new album featuring production from White, was released via his Nashville Third Man Records label, and throughout her set she doted on him like a too-cute-to-be-true grandson. Though he didn’t show (he did join for select shows this winter), she praised White for saving her career and shook her head at his stubborn ways in the studio. “Jack picked this one,” she later said, introducing her cover of Amy Winehouse’s “You Know I’m No Good,” given a sharp edge from her nine-piece band. “Rip It Up,” another newbie, twisted with the same ’50 vibe as her hits “Let’s Have a Party” and “Fujiyama Mama.” Between songs she recounted her career highlights, including her 2009 induction into the Rock and Roll Hall of Fame and her days as Elvis’ tourmate and girlfriend: “I wore his ring around my neck for almost a year.” She added that her granddaughter had urged her to perform at Bonnaroo, and even lightly scolded a guy up front for reaching down for a beach ball: “Just let the ball rest, honey. It’s tired. There’s already enough dust in the air.” — W.G.

ATMOSPHERE AT THIS TENT

“Is it cool if I keep calling ya’ll my family?” asked Atmosphere emcee Slug, a.k.a. Minneapolitan Sean Daley. The crowd’s answer was a resounding yes (by way of incoherent screams, manic hopping, and frenzied hand-waving, of course) and it felt like the coronation of an indie-hop elder statesman. Daley kept referring to himself as an old man (he’s 38) and the detailed, emotive yarns he spun from the stage turned out to be familiar tales to the young fans. They rapped emphatically along with nearly every verse of his lovelorn working class blues, and rather than focus on his group’s just-out sixth album, The Family Sign, Slug favored songs from his underground heyday. Backed by keys, guitar, and turntables, he traveled as far back as his 1997 debut Overcast! for the darkly off-kilter “Scapegoat”–a rare treat as he’s since renounced the record as trying too hard–and Atmosphere’s cult-hallowed 2001 EP collection Lucy Ford for “Guns & Cigarettes.” The generation gap was clearly not in effect, as the audience gleefully chanted the chorus’ tongue-in-cheek boast, “I wanna be bigger than the Beatles.” Ten years later, within this tent, he may as well have been. — CHRIS MARTINS

DEERVANA AT THE SOLAR STAGE

News of Deer Tick’s last-minute secret show, playing a set of Nirvana covers under the name “Deervana,” came via email from a band publicist, and apparently word didn’t get out — the crowd was tiny. But the real treat for young concertgoers was witnessing the cornerstone songs of alt-rock played live to their eyes and ears for the first time. Frontman John McCauley played a baby blue Fender Mustang guitar – Kurt Cobain’s preferred model – and chain-smoked, helping with the authenticity of his cackling, strained-vocal-chord delivery. They were loose and messy, crunchy and aggressive on “Scentless Apprentice,” “Molly’s Lips,” “My Girl,” and “Serve the Servants,” nailing Nirvana’s reckless-fun spirit. The guitarist recklessly flailed, summoning screeches of distortion from his amp. Between songs the sound of Lil Wayne’s set at the Which Stage was overbearing, but Deervana replied with a sonic “fuck you” that pushed it back with a sharp kick, just like Kurt would’ve liked. “That was amazing,” said one concertgoer. “I’ve waited 20 years for that.” — W.G.