Dr. John and the Black Keys, John Waters, the Strokes, and others make our list. Find out why! 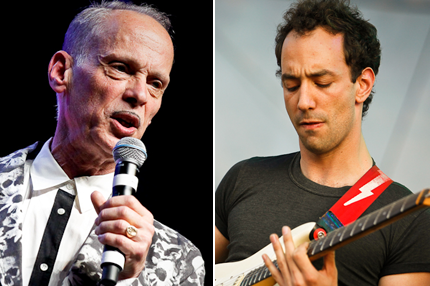 Bonnaroo wrapped up on Sunday with impressive sets from Iron & Wine and Robyn. But there were plenty of other highlights, too. Here are our Top 5:

SUPERJAM FEATURING DAN AUERBACH AND DR. JOHN AT THAT TENT
For its tenth anniversary, Bonnaroo’s programmers reasserted their allegiance to New Orleans’ ever-fluid musical influence — jazz, funk, blues, R&B, rock, hip-hop — and booked a variety of the city’s most legendary acts from Dr. John and Allen Toussaint to the Meters and Lil Wayne. As the man whose 1974 album collaboration with the Meters and Toussaint, Desitively Bonnaroo, gave the festival its name and perhaps its original self-conception as part utopian playground, part playfully funky swamp of whateva-whateva, Mac “Dr. John” Renneback was honored with two spotlight gigs.

On Saturday, the Desitively crew reunited to play the album live, and allow the Meters to stun, confound, and forever enlighten a few fresh onlookers with their advanced rhythmic calculus. The album’s lead track, “Quitters Never Win,” was a marvel of simmering shimmy. On Sunday night, Dr. John was joined by the Black Keys’ singer-guitarist Dan Auerbach, who led a band he’d assembled and rehearsed during the past week, including members of Black Keys’ touring band, My Morning Jacket drummer Patrick Hallahan, two female back-up singers, and the Preservation Hall Jazz Band. With a mix of classic New Orleans-identified tunes (“Iko Iko,” “St. James Infirmary”) and old compositions by Dr. John (who played piano, organ, and guitar), the band eased into an extended nudge and prod session, occasionally setting into a groove or flashing a bold interlude, but mostly just trying to locate mood that suited both a loose-booty raconteur like Dr. John and a canny blues-rock tactician like Auerbach.

“Mama Roux,” “Jump Sturdy,” and “There’s a Break in the Road” (a Toussaint-written, late-’60s soul track for Betty Harris) were noble efforts, but the set highlight was a properly slinky, atmospheric take on “I Walk on Guilded Splinters” (from Dr. John’s 1968 debut album Gris-Gris), with the man of honor gulping poison from his chalice and buckling his yellow belt of choison to contribute a surprisingly pointed slide guitar solo and to give the song’s distinctive Creole patter (“Kon kon the kiddy kon kon”) a stolid majesty. It was just the sort of moment of wonderfully groggy transcendence that Bonnaroo exists to conjure. – CHARLES AARON

BEIRUT AT THE OTHER STAGE / THE STROKES AT THE WHICH STAGE
About 90 seconds before the Strokes were scheduled to walk onto the Which Stage to help close out Bonnaroo, singer Julian Casablancas was across the festival grounds, leaning against a rafter backstage watching Beirut perform. Noticing the time, the rocker hopped in a van, raced across the fest, and walked onstage. A few songs into the Strokes’ set, Casablancas said, “So, Beirut. Pretty good, huh? Tough choice tonight… Uh, thanks for being here.” Enthusiasm! The decision was a tough one: Beruit’s Zach Condon offered an 80-minute festival capstone for a sleep-deprived Sunday crowd. The six-piece’s uplifting sound came via horns, xylophones, keys, and a six-string acoustic guitar the size of a ukulele. They debuted a new song, tentatively named for Condon’s home town of Sante Fe, which was elegant and emotive, soaring on accordion pulses and a group blast of brass.

The Strokes’ set sounded great, but their interest seemed limited. They played the usual mix of the classics – the best being Is This It’s “Hard to Explain” and Room on Fire’s “Under Control” – plus the two best tracks from their new album Angles: first single “Underneath the Cover of Darkness” and ’70s glam rocker “Gratisfaction.” Casblancas continued on in his charmingly slack anti-glory: “Well, that was that one,” he said after finishing one song. Then the quintet left the stage 15 minutes early to an orchestral version of the M.A.S.H. theme song. — WILLIAM GOODMAN

EXPLOSIONS IN THE SKY AT THIS TENT
When a band doesn’t rely upon words to get its message across, there’s room for personal interpretation, and no one is better at letting fans choose their own adventures than Explosions in the Sky. Austin’s Mark Smith, Munaf Rayani, and Michael James (accompanied by drummer Chris Hrasky) let their guitars do the talking just as the sun started to set and the breeze began to blow. The combination of the quartet’s panoramic post-rock and the sudden cool-down made for epically cathartic results–it felt like a time to reflect on the long weekend’s events, to heal from the damage done, or celebrate the fact that you came through it all intact. While the band toyed with the loud-quiet dynamic, luring listeners into a place of placidity then blowing them back (sometimes physically) with squalls of shred, everyone seemed to have their own reaction to the trio of guitars, which at times sounded like an entire string section, ringing bells or a swarm of cicadas. Sure, there were a handful of headbangers, but there was also the circle of kids chanting some invented incantation; the guy who’d climbed up between the tent’s support cables and used them as a hammock; the other guy seemingly meditating on top of the garbage can; and the girl who from the midst Bonnaroo’s center fountain seemed to believe she was conducting Explosions as the water poured over her head. Who knows–perhaps she was.
– CHRIS MARTINS

JOHN WATERS AT THE COMEDY TENT
John Waters, the Baltimore-based cult film director behind Hairspray and other, darker pioneering movies, has an idea for a new flick, which he shared during his set at the Comedy Tent. It’s a sequel to 2009’s Precious, he said, and it involves the namesake protagonist, an obese 16-year-old girl in New York who gave birth to her rapist father’s children in the original, forming a dance duo with her abusive mother, played by Mo’Nique, and “getting pregnant with a white baby by Justin Timberlake.” Are you listening, Oscar voters?

Dressed in a svelte suit jacket decorated with skulls, the 65-year-old’s show mixed some relative straight talk about his career and movies, including Dirty Shame and Pink Flamingos, which he said was a “publicity stunt that worked,” and some random, sick and hilarious stories in his suspiciously casual tone. He talked about “bears,” slang for hairy large men in the gay community (“their jiz is called ‘grizum,'” he cracked); “squashing,” the act of having sex with food, which he endorses – “Hey, you can’t date rape a piece of cake”; and the act of having skin from manly testicles swapped for a clear film in order to view the sperm-making process. He encouraged young filmmakers, too, saying that making a movie today is easier than ever. All you need is the simple technology available on most new laptops and a subscription to the New York Post: “Their headlines are the best,” he said. “When Ike turner died at 2007, the headline was: ‘Ike Beats Tina to Death.” Then he laughed uncontrollably. – W.G.

JUNIP AT THE OTHER TENT
It’s hard to hear it on Junip’s captivating LP debut, Fields, but live the Swedish four-piece led by minimal folkist José Gonzáles channels a heavy ambient prog vibe, like Tool at its most droning, undercut by the more obvious influence of ’60s psych-pop. In the heat of the day, their otherwise low-key songs became as thick as the humid Tennessee air, growing threefold in depth as the band worked overtime to morph their slowly drifting music into heady sampler funk (“Sweet and Bitter”), opiatic jazz (“Off Point”), and electronic bluegrass (“Rope and Summit”). Like the Krautrock forbears the band draws inspiration from, Junip’s players experimented with odd elements–congas hit with mallets, a field recorded preloaded with insect noises, Gonzáles’ resonant mumble even–to arrive at their inimitable sound while the audience looked on, seemingly immobilized the band’s handsome, well-considered experimentation. The viscous heat could have been responsible for all of those blankly beatific expressions, of course, but it was easier to believe that Junip was transporting the crowd to some other plane.–C.M.