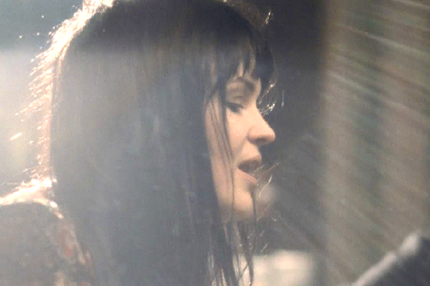 The Kills’ fourth album Blood Pressures, out now, is the blues-punk duo’s most expansive yet. “What’s surprising is how much their songwriting has evolved,” SPIN writes in an eight-out-10 review. And in a short but insightful new documentary, which bears the same name as the album, Jamie Hince and Alison Mosshart discuss their craft.

“All the songs came from acoustic guitar, which is probably a normal thing for most groups, but our records in the past have come from guitar sounds or rhythms,” Hince says of their new direction in the 11-minute clip. “The sound is quite brutal and unforgiving. But there’s a contrast between that and some pretty melodies.”

Directed by Will Lovelace and Dylan Southern (who also helmed the Blur reunion doc No Distance Left to Run), Blood Pressures shows the duo goofing off — at an arcade, on the beach, at a diner — and in their rehearsal space, and performing acoustic renditions of Blood gems “Pots and Pans,” “Baby Says,” and one of their most expansive songs yet, “The Last Goodbye.” It’s a “classic, slow and sad… waltz,” says Hince. Adds Mosshart: “Before it was like a Velvet Underground song it felt more like a Patsy Cline song… you could sing it without any music. I’m excited to reinvent that song all the time.”