Death Cab frontman on getting sober, fantasy baseball, and whatever happened to the Postal Service. 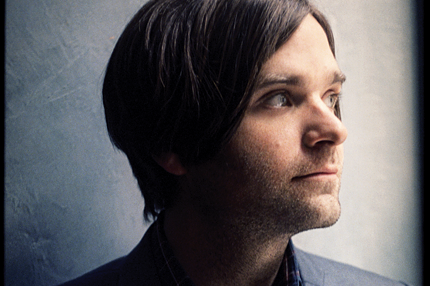 In the three years since Death Cab for Cutie released their gold-selling Narrow Stairs, frontman Ben Gibbard has quit drinking, moved to Los Angeles, and–oh, yeah–married movie darling Zooey Deschanel. The former Seattle resident has also taken up running in a major way. “I hit a wall at mile 19,” says Gibbard, 34, a few days after he’d finished the L.A. Marathon with a time of 3:56:34. “I would have liked to have been a little faster.”

Change will be the operative word for Death Cab fans when they hear Codes and Keys (Atlantic), the band’s slickest, hookiest, and least mopey album yet. Gibbard, who is also known as one half of the still-on-hiatus electronic-pop side project the Postal Service, called to discuss his life and work, even though he admittedly had fantasy baseball on the brain.

You met your marathon goal of finishing in less than four hours, yet you lost to Flea. Why was beating Flea not your goal?
It was, actually. Flea was the only person I kind of know who was also running the marathon, and I foolishly thought there was a possibility that I could beat him. This was the first marathon for each of us, and I think all of those years bouncing around stage playing funk bass gave him the edge. He just had a little more stamina than I did.

When did you get into running?
In 2008. I started running around the same time I quit drinking. I felt like I needed to replace an unhealthy obsessive compulsion with a healthy one. Writing is such a solitary act. You spend hours alone, only with your thoughts, and you torture yourself. It’s a tendency of many writers to temper the self-destructive act of writing with other self-destructive acts. I certainly was one of those people for a long time.

How bad did the drinking get?
It got bad enough that I thought that if I didn’t stop, somebody was going to tell me I needed to. I realized that I didn’t want anybody to pull me into a room and tell me they were worried about me–I knew I had a problem. And at that time of my life, I pushed it and perpetuated it because I knew I was going to have to stop, so why not get my rocks off now?

Do you remember your breaking point?
Oh, yeah. I went on a bender in Big Sur with a friend of mine for a couple of days. It was so stereotypically my own little Kerouac Big Sur weekend. And I remember being on the flight home, going, “You know what? I really have to do something about this. This has really gotten out of control. But I have a friend’s birthday tonight, and I need to go out and have a beer with him.” Cut to three in the morning, five beers and five shots in, eating a pizza. I woke up the next morning and I was like, “That’s it. I’m done. I have lost the ability to control this.”

Did meeting Zooey factor in?
By the time we started dating, I was a good four or five months into [sobriety]. Quitting had been such a positive change in my life. Nothing was going to make me want to go back to that. But I want to qualify that. I’m not, like, walking around with a chip in my pocket. I don’t have a sponsor. I don’t go to AA. It’s not like that.

How did the health kick affect your songwriting?
Once you realize that a positive act helps to balance out the negative act of being a writer, you become a more balanced person emotionally. I think the writing reflects that. The music is much more balanced than ever. Whether people are along for the ride is to be determined, but I’m proud that this record is a more even emotional palette than Narrow Stairs was. That last one is our most depressing record.

I have to ask: What’s your fantasy baseball team name?
The Bremelos. It’s from a song by Sir Mix-a-Lot, which talks about a particular type of woman who was prone to hooking up with sailors in Bremerton, which is my hometown in Washington State.

Is Flea in your fantasy baseball league?
No. And while I’m certainly comfortable in my fantasy baseball-isms, I don’t want to out anybody else. Some people are embarrassed by it. But we do have a pretty good amount of rock’n’rollers in our league.

So, the Postal Service. Did stamps just become too expensive?
Yes, stamps have gotten to the point where, even given Jimmy [Tamborello’s] and my success, it’s just become a bit cost prohibitive for us. And even if you put something in the mail, there’s no guarantee it will arrive. Honestly, we finished the record seven years ago and it got lost in the mail. As far as I know, the new Postal Service album is in Indonesia.