Members of Wilco and the National join the composer for a special night at Carnegie Hall. 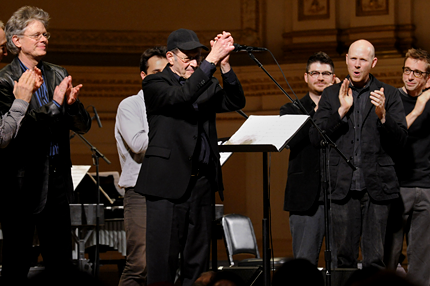 “Brevity is the soul of wit,” Shakespeare’s Polonius tells us — and brevity can also be a hallmark of genius. At New York’s Carnegie Hall Saturday night, American composer Steve Reich celebrated his 75th birthday with four pieces in less than two hours, including intermission. The compositions, all written since 2007, were individually marvelous (one featured the National’s Bryce Dessner and Wilco’s Glenn Kotche) and collectively provided a terrific summing up of what Reich is all about.

Reich uses elements of so-called world music (his early training was as a drummer at the University of Ghana) and popular forms like rock and jazz to create music that seems to thrive on repetition; many of his pieces are built on what he calls “pulses” which, once established, go in and out of phase with each other and with the instrumentation he uses as a rhythm section. It’s a technique that makes much of his music instantly recognizable, and it defined the first piece of the evening, “Mallet Quartet,” played on two vibraphones and two marimbas by the percussion ensemble Sö Percussion (Josh Quillen and Adam Sliwinski on marimbas, Eric Beach and Jason Treuting on vibes).

Reich composed the piece considering the possibilities of the new-fangled five-octave marimba, which packs more bass notes into its array, and indeed, the piece’s subtly shifting bass “line,” as it were, added ballast to sonic textures that pulsated and shimmered with a near-cosmic sense of order, but not uptightness.

There’s often a joyous lightness to Reich’s work, and it was in full evidence here; the fifteen-minute composition was some kind of miniature crystal cathedral of sound, full of light and air. At a point about a third of the way through, when the hive-like activity of the malleteers seemed to drop through a trap door and be instantaneously replaced by a lyrical slow section, the effect was breathtaking.

The next piece was equally short but ever more weighted. “WTC 9/11,” co-commissioned by the Hall, prominently featured another important ingredient for much of Reich’s work, pre-recorded material. (One of Reich’s best-known early pieces, “It’s Gonna Rain,” considered a groundbreaking minimalist work, is in part a tape loop of a street preacher repeating the title phrase.)

The renowned Kronos Quartet played to a tape of themselves with voice recordings made in the midst of the terrorist attack on New York in 2001, as well as eyewitness accounts told afterward. It’s a tricky theme to navigate, taste-wise, and early on, as cellist Jeffrey Zeigler’s musical line doubled the near-panicked words of a trapped firefighter, one had slight misgivings about whether Reich could pull this off.

He did. The brief, intense piece, which ended with mourning notes and singing in Hebrew from the Psalms, was both intellectually provocative and deeply moving.

After intermission, it was time to rock, sort of. Reich’s 2008 “2×5″ was scored for two bands — each with two guitarists, a bassist, pianist, and drummer (hence the piece’s title) — and joining downtown avant-garde stalwarts the Bang on a Can All Stars to perform it were a couple of unostentatious alt-rock heroes, Glenn Kotche of Wilco on drums and Bryce Dessner of The National on guitar.

To their credit, they didn’t receive any special shout-outs or take any separate bows, just got up with the rest of the ensemble, blended in, and played this demanding music with great precision and vigor. As it happened, the most visually arresting member of the group was its longtime guitarist and musical director Mark Stewart (not to be confused with the founding guitarist of post-punk ranters The Pop Group), who has a day gig with Paul Simon and who, with his loose tie-dyed top, red jeans, and seemingly dreadlocked ponytail, had the air of a well-heeled Deadhead.

The music was bracingly loud, and spectacular. For the first section, simply titled “1.Fast,” the drummers beat out a complex pattern that was nearly martial in its severity and aggression, the pianists provided a near-racing pulse, and the guitarists penetrated this shimmering wall with deep-stabbing treble-heavy chords.

In much of Reich’s music there’s a sense of something mounting within the fierce static; think of the “ba-da-DUM” repetitions at the climax of Television’s epic “Marquee Moon,” only with more complex rhythmic interplay. But a crucial difference with Reich is that this sort of thing never gives way to a climactic “explosion,” or any such thing. The tension merely shifts, or drops out, but is always replaced by some other discrete musical event. It’s satisfying in a very different way than more conventionally structured stuff, leaving the listener feeling refreshed instead of drained.

The final piece “Double Sextet,” performed by some of the Bang on a Can crew and the contemporary classical ensemble eighth blackbird, inadvertently highlighted the dissimilarities between Reich and contemporary Philip Glass, largely due to the instrumentation, which contained the wind pieces clarinet and flute, which Glass uses heavily and Reich normally eschews.

The key similarity was the repetition of motifs. But where even Glass’s most accessible work thrives on a certain type of relentlessness, Reich, rather pointedly in this piece, shifted gears into long stretches in the realm of the near-pastoral. Time flew, then slowed down; you got a sense of flotation combined with the sharpest focus possible.

In the end, every piece of the evening was a small miracle, and the composer was clearly more than chuffed as he came on stage for his bows at the end… The crowd remained transported.

Glenn Kenny
Tags: Steve Reich, We Were There