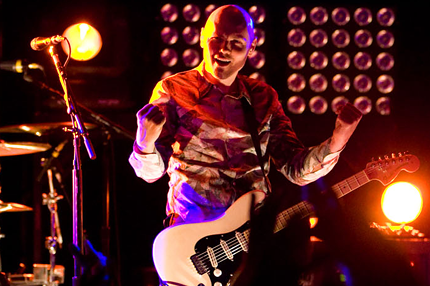 Billy Corgan is only about one quarter of the way through his 44-track opus Teargarden by Kaleidyscope, which he’s releasing one track at a time online, but the Smashing Pumpkins leader is showing no signs of fatigue. The singer-guitarist has just released the 10th track of his project, titled “Owata,” which you can hear over at L.A. Weekly.

Corgan’s Kaleidyscope album may be an over-the-top project, but “Owata” is straight-forward rock’n’roll. The track is a gorgeous, uplifting guitar anthem that mixes slick arena-ready guitar solos with the sharp pop sensibility of classic Fleetwood Mac. “Oh, what a beautiful sight you are to me,” Corgan croons over glossy synths and chiming acoustic guitars. “Oh, what a beautiful night!”

As SPIN previously reported, Corgan’s next project will be titled Oceania, which he’s dubbing an “album within an album” of the Kaleidyscope project. The LP is expected to be released in September. “Even though I pronounced the album dead, I guess I still wanna do another one,” he said.

Corgan is also prepping a massive reissue series of Smashing Pumpkins’ entire catalogue, which will be packaged with bonus material. The first reissues — 1991’s Gish, 1993’s Siamese Dream, and 1994’s Pisces Iscariot — are due out this fall.