Watch His Purpleness team up with the No Doubt singer at his Los Angeles show for "So Far, So Pleased." 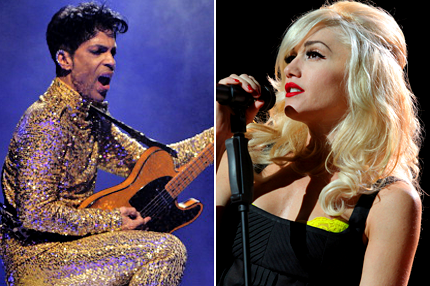 Prince is in the middle of a 21-date Los Angeles run for his Welcome 2 America tour, and like the over-the-top performances for his New York City gigs (which included the pop star kicking Kim Kardashian off the stage), His Purpleness is going all out for his West Coast concerts. At Saturday’s show at The Forum, he was joined on stage by No Doubt’s Gwen Stefani for a hot rendition of their collabo “So Far, So Pleased,” from his 1999 album Rave Un2 the Joy Fantastic. Check out some crowd-shot footage here.

Even a celebrity like Stefani seems absolutely thrilled to be in his presence: Scan forward to the 1:15 mark to watch her squeal like a schoolgirl. Prince, meanwhile, looks as if couldn’t care less: He struts over to Stefani, grabs her mic and asks the crowd, “Who is that?” before casually tossing it back to her like the eternal badass he is.

Prince’s L.A. shows wrap May 7, but as Billboard reports, even show organizers don’t know where the tour will continue on to next. “He has not discussed anything beyond L.A., and L.A. was decided literally as the trucks were leaving the Carolinas (at the end of March),” a rep for Live Nation, who is promoting the tour, said. “The drivers needed to know what direction to go and Prince said, ‘head west.’ By the time they were halfway across the country, they were told to go to Los Angeles… Spontaneity is in play on all levels. We’re all waiting with bated breath as to where he’s going after Los Angeles.”