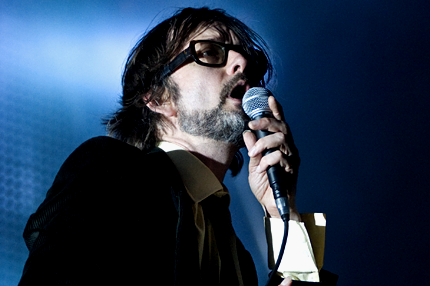 For some 140,000 fans in Barcelona this weekend at the San Miguel Primavera Sound festival, music wasn’t just “alternative,” but an alternative. Last week unemployment among Spain’s youth reached nearly 45 percent, which NPR says is a record for an industrialized country. A growing throng of students — calling themselves indignados, or “angry ones” — camped out in Plaça de Catalunya, sparring with riot police throughout the weekend, mirroring the actions of like-minded groups throughout the nation.

While that message stayed largely outside the festival grounds at the breezy, seaside Parc del Forúm, another massive event did find a foothold: The city’s beloved soccer team, FC Barcelona, played Saturday night in London against Manchester United for the European championship, and the festival decided to broadcast the game onsite for thousands of dedicated blaugranes (Barcelona supporters) and more than a few United faithful, too. Barcelona took the match 3-1, leading to a victory parade Sunday with an estimated crowd approaching one million.

Whether taking a break from joblessness or jocks, music fans had a wide array of welcome distractions at Primavera. These were our favorites:

PULP
Sure, they returned to the stage with their classic mid-’90s lineup in a French club on Wednesday night, but Primavera was the proper kickoff for the British art-pop band’s comeback tour, the first of more than 20 dates scheduled this summer, and the single most mentioned rationale for the thousands of international travelers who descended on Parc Del Forúm. Frontman Jarvis Cocker, in all his lanky but rapturous glory, cried out the chorus of set opener “Do You Remember the First Time” to the wide-eyed throng, but it was the wrong message. It didn’t matter if you’d ever seen Pulp before because this time would eclipse the rest.

In part, it had to do with how the band’s conversational, at-times dainty rock felt rocket-powered and absolutely capable of filling a festival space, on everything from sparsely arranged songs like “F.E.E.L.I.N.G.C.A.L.L.E.D.L.O.V.E.” to guitar-laden rave-ups like “Disco 2000.” Even the title track from the dark, minimal record This Is Hardcore was delivered with thunderous, NIN-ish oomph.

And while his band churned out hits at full throttle, Cocker still routinely hogged the spotlight — and it was just what people wanted. “So, what have you been doing for the last 15 years?” he offered cheeklily.Later, he even officiated over a front-row marriage proposal just before unleashing a sexed up take on “Underwear” while the lady made up her mind (she said “yes”).

INSTRUMENTAL ROCK REIGNS
At a truly international festival, with a multitude of languages being spoken across the site, instrumental music seems like an obvious unifier. But three bands’ late-night sets went a step further. Coaxing every possible decibel out of the gigantic Llevant Stage to a huge Saturday night crowd, many of whom were still celebrating FC Barcelona’s soccer victory, which had been aired on screens adjacent to their stage, Scottish quintet Mogwai layered wave upon wave of sculpted guitar distortion, as if they were battling back the incoming tide from the Mediterranean Sea.

Austin rockers Explosions in the Sky ably filled the time on Friday night between Belle & Sebastian and Pulp with their own wordless assault, although their brand ebbed a bit more than Mogwai’s aggressive surge. Their crowd, at times, felt as if it was full of the jocky football heroes of Friday Night Lights, the TV drama that often utilizes their music, but their set offered proof that live music can be just as emotive without any lip movement. Tejas para siempre.

Then, in a set that started at 3:45 A.M., Battles got busy with their newly-trimmed-to-a-three-piece lineup before an enormous crowd of at least 15,000. Whether folks were high, mesmerized, or just too beat to fight their way home, heads bobbed and bodies bounced to the group’s near-perfect Gloss Drop (out next week), which sounds like Aphex Twin on a Catalan cava bender.

YUCK
The peppy Britpop quartet have a song called “Milkshake,” which they played in the midst of their sun-kissed Saturday afternoon set, dedicating it to the glorious weather. The song title also speaks to the group’s sound, a nifty blend of so much early ’90s awesomeness, from the gentle shoegaze of Teenage Fanclub (“Get Away”) to the epic bombast of Smashing Pumpkins (“Rubber”). Set against the backdrop of a rainy British festival, Yuck’s shimmering aesthetic is probably an exercise in contrasts, but in Barcelona, it was just plain pretty.

WARPAINT
Even though their recent album The Fool hints at an expansive potential, it did not in any way adequately prepare Primavera-goers for the band’s immersive, gorgeous-sounding appearance on Saturday evening. Stepping up and delivering in a huge way on the festival’s largest stage, the all-girl quartet nailed every stretch of vocal harmonies, ultimately saving their best song, “Undertow,” for next to last. Its chorus might pilfer Nirvana’s “Polly” and Suzanne Vega’s “Luka,” but damned if that wasn’t Primavera’s most common (and welcome) stuck-in-your-head-for-Sunday’s-hangover jam of the year.