The Jersey rockers tap Dave Hause of the Loved Ones to star in a gut-wrenching video chronicling a messy split. 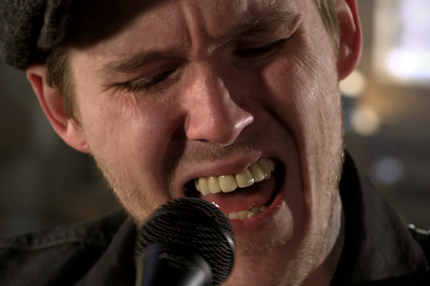 New Jersey rockers Gaslight Anthem have made a video for “Bring It On,” a stand-out track from last year’s stellar American Slang – and SPIN has the premiere of it here.

In the clip, directed by Kevin Slack, the band got their pal Dave Hause of the Philly punk band Loved Ones to play a starring role. “The song is a true to life kind of story about a guy who’s left behind in a divorce,” Fallon tells SPIN, adding that drummer Benny Horowitz’ brother plays the role of the “suave other man.” “So the video reflects that directly – it’s very literal.”

After Gaslight perform a string of European dates starting next month, Brian Fallon willfocus on his side project the Horrible Crowes, who will release their debut album this September. Check back next week for details about the project – plus an update on Gaslight’s future plans.

WATCH: The Gaslight Anthem, “Bring It On”