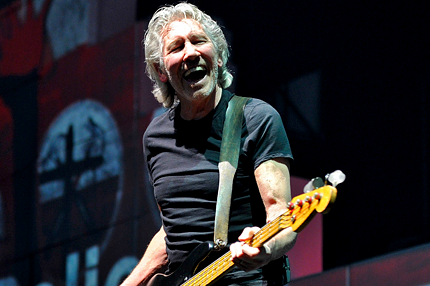 The surviving members of Pink Floyd — Roger Waters, David Gilmour, and Nick Mason — have sworn they will never reunite to tour again after breaking up in the mid-’80s, but at Roger Waters’ show last night at London’s O2 Arena (part of his current The Wall Live Tour), the three reunited for a rare on-stage collaboration, their third in as many decades. Watch fan-shot footage of them performing “Comfortably Numb” and “Outside the Wall” below.

The reunion was months in the making. Last summer, Waters and Gilmour, who had a falling out during the making of 1983’s The Final Cut, buried the hatchet to perform at a benefit concert for the Hoping Foundation. (It was the first time they played together since 2005’s Live 8 show in London, which was their first show in 24 years.) Gilmour promised to join Waters for one of his Wall shows if he participated in the charity show.

“How could I refuse such an offer?” Waters wrote on his Facebook page. Ten months later, Gilmour made good on his end of the bargain, which was made even sweeter with the addition of drummer Mason for a rendition of “Outside the Wall.” (Pink Floyd keyboardist Rick Wright died in 2008.)

Despite Gilmour and Waters reunion, Gilmour says it was definitely a one-off. A post on his official site reads, “David is not repeating his special guest performance for a later occasion.”

In related news, Pink Floyd and EMI are teaming up for a massive reissues series that kicks off later this year. Dubbed Why Pink Floyd…?, the campaign includes previously unreleased material and digitally remastered versions of the band’s studio albums, including a six-disc box set edition of Dark Side of the Moon, out September 26. Also available: deluxe versions of Wish You Were Here (out November 7), The Wall (February 27, 2012), and a best-of release titled A Foot in the Door (November 7). Head to Pink Floyd’s official site for more info.

WATCH: Pink Floyd, “Outside the Wall”