The debut record from Fall Out Boy bassist's new band is on track for a late-summer release. 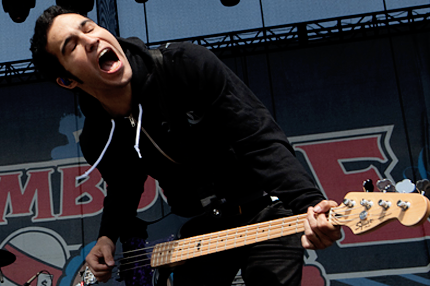 Pete Wentz revealed to SPIN that his new ska-pop project Black Cards, which features plucked-from-obscurity singer Bebe Rexha, will release its debut album in late summer or early fall. Hanging out backstage at last weekend’s Bamboozle fest in New Jersey, Wentz also talked about the solo record from his Fall Out Boy bandmate Patrick Stump — he digs it! — and reflected on how throwing himself into Black Cards is helping him cope with struggles in his personal life.

“We have a whole Black Cards album done, and now we’re just writing more songs that might beat out some of the existing songs,” he said. “There are also a couple of new songs that aren’t even finished yet that could make it on the record. I have a song that I think I posted a demo of called ‘Paradox,’ a song called ‘Take More Than I Can Handle.'”

Download a song from Black Cards on SPIN’s Bamboozle mixtape.

All four members of Fall Out Boy have moved on to other projects during their band’s long-term hiatus — singer Patrick Stump has gone solo (and R&B-ish), and guitarist Joe Trohman and drummer Andy Hurley are rocking hard in the Damned Things — but they haven’t talked much about each other, or Fall Out Boy, publicly. Wentz, however, says the bandmates “are all closer friends now that we have been in a really long time.” Wentz just had Stump over for Easter.

“I’ve been nothing but supportive,” he said of Stump. “I also think his music is really good. I got a chance to see a video of some of the live shows and it just looks insane. He’s doing a thing that nobody else is doing right now.”

“I think that if Fall Out Boy got back together,” Wentz continued, with emphasis on the “if,” “that’s the healthiest thing — that everybody exercises those creative energies that they have going on.”

The past 18 months not only saw disturbances for Wentz within the Fall Out Boy camp, but also at home: Ashlee Simpson, his wife and mother of his two-year-old son, filed for divorce in February. For the confessional Wentz, who has always used social media to speak directly with his fans, it’s been a difficult period, but Black Cards, who made their live debut in January, is providing him a positive escape.

“I ended up having to really talk about my life and my family and my friends way more than I ever wanted to,” he said. “The good thing about doing something creative and going out on the road is that it just takes your mind off of that, and having to do that.”

So for now, Wentz is in full-bore Black Cards mode, and is humbled in doing so: “I think people expect us to ride in on Fall Out Boy’s coattails but it’s so different. It’s like the dude in the pop punk band goes and makes a pop album that you’re supposed to, like, smoke wacky tobacckey on the beach to, you know? Weird! I never planned on doing that in my entire life.”

The band will play a Central Park SummerStage show September 1, supporting Panic! at the Disco and Neon Trees, but has no other major live performance plans at the moment. “If anyone’s reading this and wants to pick us up on tour, we’d like to go out,” he quipped. Back to square one, indeed.