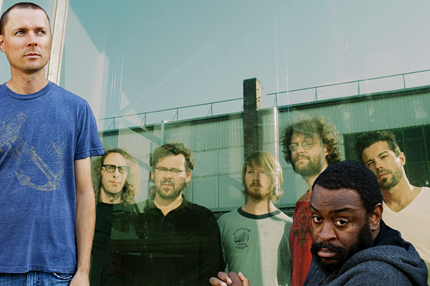 If you’re into unlikely collaborations — like Modest Mouse and Big Boi — here’s another one you need to check out: 13 & God, the unexpected alliance of Oakland rap collective Themselves and German electro group the Notwist, who, after a six-year break, will drop their gorgeously melancholy second album, Own Your Ghost, on May 17 via Anticon.

SPIN has an exclusive premiere of their music video for “It’s Own Sun,” a dreamy track with soft electronic breezes, spare acoustic guitar, piano, mournful synths, and lyrics exploring old age and death: “Thin into your frame / Heals all the veins / You’re bloody / Darkened by the decades,” sings Markus Acher.

The video builds off that mysterious sentiment with images of dancing skeletons and flying ghosts. “It is important to ‘play ghost’ at least thrice a week,” Acher, who directed the clip, tells SPIN. “One must remember their flexible but precise relationship to death… and don a sheet every now and again to joke with a thing that never plays with you.”