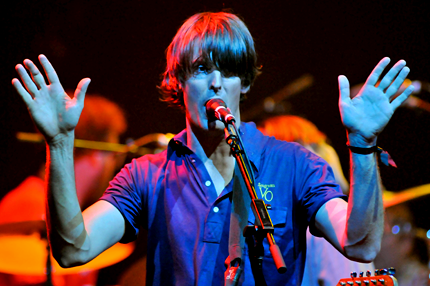 It’s one of the eagerly awaited albums of 2011: Pavement’s Stephen Malkmus’ fifth solo release, produced by Beck. And now we have some essential details: The LP, called Mirror Traffic, will drop August 23 via Matador Records.Check out the cover art (right).

The new effort features Malkmus’ longtime band the Jicks. However, it will be the last for drummer Janet Weiss. She will continue with Wild Flag, her new band with Mary Timony and her former Sleater-Kinney bandmate Carrie Brownstein.

Jake Morris, drummer for Portland, OR, outfit the Joggers, will join the Jicks for their upcoming shows, which will be announced “very soon,” according to a statement from Matador. “We’ll also get on with the business of previewing an MP3 from Mirror Traffic on a date in the very near future.” Until then, check out footage of Malkmus and the Jicks performing an unreleased song called “Senator” at a Portland gig back in 2009.