Hear the Strokes frontman sing the rock icon's classic "Rave On," from the upcoming tribute disc. 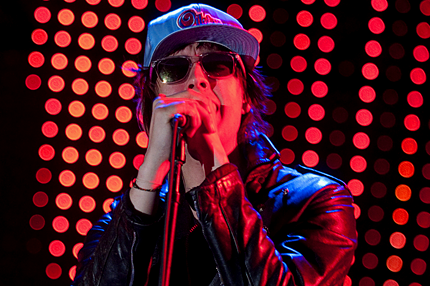 Buddy Holly and his music will be honored by some of rock’s top acts with a tribute album Rave On Buddy Holly, due June 28. The record features Cee Lo, Florence + the Machine, She & Him, Paul McCartney, Fiona Apple, and others delivering covers of the rock’n’roll icon’s most beloved tunes. So far, The Black Keys and Modest Mouse have leaked their versions, and now Julian Casablancas has released his – a raucous rendition of Holly’s classic “Rave On.”

Casablancas’ cover is a stunning reinvention of Holly’s original. The Strokes’ frontman mixes chunky, fuzzed-out guitars and clattering, garage-y drums for a gritty tribute. Still, Casablancas does a fine job of emulating Holly’s trademark hiccup-y vocals in his nicotine-stained tenor, and the twangy lead guitars and back-up vocal harmonies are square in-line with the proto-rock’n’roll vibe of Holly’s 1959 version.