The Killers Talk Next Album 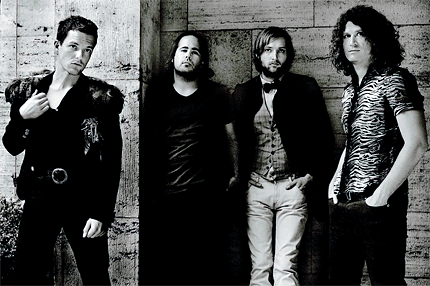 More than a year after the Killers went on hiatus, the Las Vegas rockers are reuniting this week at their hometown HQ — Battle Born Studios, which they own — to start work on their yet-to-be-titled next album, the follow-up to 2008’s Day & Age.

“We’re getting in a room to grease the machine. We’ve traded ideas for songs online and worked songs out during soundchecks [the band have been playing select dates this spring],” says drummer Ronnie Vannucci. “We have some songs written, plus some that haven’t been released that are on the cutting room floor. The objective is to get in the room and see what we come up with.”

While the Killers don’t have an official release date for the LP, Vannucci jokes that “it’d be nice to have the album out before 2012 — you know, before the world ends.” A band spokesperson had no comment on Island Records’ release schedule.

During the band’s downtime, singer Brandon Flowers and Vannucci both recorded solo albums. But those side-projects won’t alter the team dynamic of the Killers, says Vannucci: “When you’re in a band that’s a democracy, like this is… it’s all about compromising and making something together.”

Vannucci adds that the Killers are revitalized and ready to work together toward a single goal. “We want to make the best record ever with this one. Everybody’s in that mind set of really focusing and putting the hammer down to make it happen.”