The drummer will release his debut Big Talk in July via Epitaph Records. 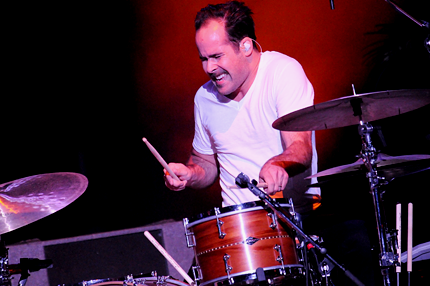 The Killers are beginning to emerge from their year-long hiatus, headlining festivals like London’s Hard Rock Calling in June. But during their downtime drummer Ronnie Vannucci, like singer Brandon Flowers before him, recorded his debut solo album, Big Talk, set to drop July 12 via Epitaph Records.

“I needed to do this,” Vannucci says of the LP, tracked with producer Joe Chicarelli (the Strokes, My Morning Jacket) and mixed by Alan Moulder (U2, Foo Fighters). “And now, having done it, it feels like the right thing to do. It all feels very natural.”

For Big Talk — also the name of the band — Vannucci recruited guitarist Taylor Milne, his old friend and former bandmate in late-’90s indie outfit Expert On October. “All these really cool leads that you’ll hear on the songs are Taylor,” Vannucci says. “We work on things together, but it’s his take, so sometimes it’s very different. It sounds fresh to me.”

Vanucci didn’t provide any other details about the sound of the album, but added that the band will hit the road this summer; complete dates are expected soon. Big Talk is available for pre-order now at Epitaph’s website; its first single, “Getaways,” hits iTunes May 10.