The Killers Hitting the Studio Next Week

"We all have piles of songs we want to show each other," says drummer Ronnie Vannucci. 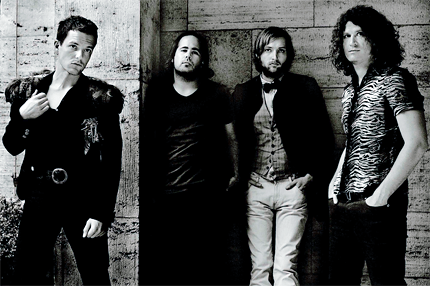 Ronnie Vannucci hasn’t even completed the promotional cycle for his new project Big Talk, but the drummer has revealed that the Killers will head back in the studio next week to work on a new album — their first since 2008’s Day and Age.

“Tuesday, I think we start doing some writing,” Vannucci said in an interview with London’s Xfm radio. “We all have stuff… piles of songs we want to show each other. We want to get back in the studio and start writing.”

The drummer didn’t reveal more details about what the new material will sound like, only to add that it is the first day the group will be convening in the studio. “It’s a big day,” he said. The group are also planning to return from a year-long hiatus in June; they’re scheduled to perform at London’s Hard Rock Calling festival.

As for his side-project Big Talk, Vannucci revealed that the band came about mostly because he was bored once the Killers wrapped up touring behind Day and Age. “Everybody kind of disseminated…and a week went by and I was like, ‘What’s going on? I’m bored,'” he said, adding that he didn’t discover his talent for singing until very recently. “I never sang before last September. It’s really, really weird.”

Vannucci also revealed that Killers frontman Brandon Flowers was a big inspiration for his lyric writing and recording — it turns out that Flowers was also new to singing when the Killers formed in 2001. “[With] my experience having to lay vocals down and write lyrics, I would remember how he would do it: he was just always so fearless and just didn’t give a shit and just really put it out there on the line,” Vannucci said. “I really admired that. Why be bashful?”

Ronnie Vannucci’s debut with Big Talk will be released July 12. Check out the album’s lead track “Getaways” below.