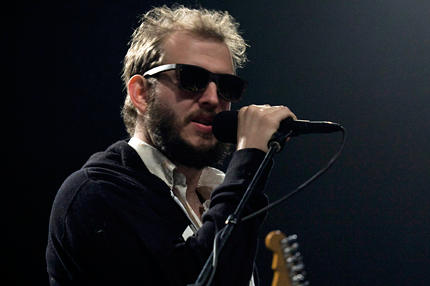 The LP sees Bon Iver mastermind Justin Vernon veering stunningly towards more expansive sounds than appeared on his debut,For Emma, Forever Ago, which was recorded lo-fi in a Wisconsin woodshed. This time around, with members of his live band joining the fray, as well as a few additional musicians, the sound on Bon Iver maintains that gorgeous, enchanted atmosphere vibe, but with more dramatic climaxes — and “Calgary” is no exception.

On the track, a graceful swath of keyboards underpins Justin Vernon’s voice, delivered in multi-track harmony, as shards of synthesizer sounds flicker about in the periphery, nodding a bit to Vernon’s collaborations with Kanye West.

But, unlike many of the freewheeling, spacey songs from For Emma, “Calgary” leaps headlong into a straightforward, almost hard-rocking bridge, with Vernon’s voice coming as close to a snarl as ever before.

Bon Iver are set for a May 23 performance on Late Night with Jimmy Fallon, and the album is available for pre-order now via Jagjaguwar’s site, and via iTunes starting tomorrow.