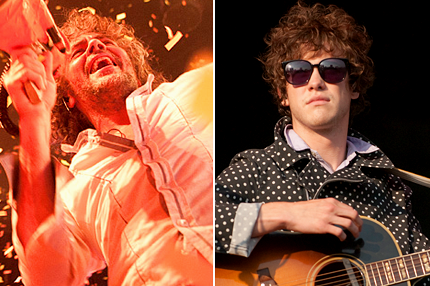 Fans who attended this weekend’s Beale Street Music Festival in Memphis, TN, were treated with a surprise during the Flaming Lips’ set: a collaboration with MGMT’s Andrew VanWyngarden and Ben Goldwasser on a cover of the psychedelic rockers’ 2008 smash “Kids.” Shaky fan-shot footage has now hit the web, which you can watch here.

Flaming Lips are no strangers to performing unconventional versions of pop and rock classics — they’ve delivered killer tributes to Pink Floyd’s Dark Side of the Moon live and their cover of Madonna’s “Borderline” has been reworked from a dance-floor burner into a soaring anthem — so it was no surprise to hear them totally rejigger “Kids.” Wayne Coyne and Co. dialed back the funk for a campfire-ready ditty, which was enough to inspire the entire crowd to sing along.