MMJ get back to their roots on 'Circuital,' while Death Cab for Cutie trade gloom for uplift on 'Codes and Keys.' 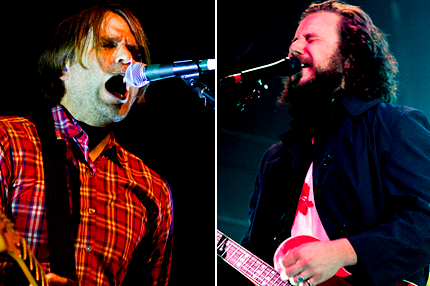 Two of rock’s heaviest hitters will be going to bat next Tuesday with killer new albums:Death Cab for Cutie will release Codes and Keys while My Morning Jacket will return with Circuital. NPR has complete streams of both: Head here to listen to Codes and Keys andhere to check out Circuital.

With Circuital, MMJ bounce back after 2008’s Evil Urges, which featured occasionally misbegotten jam-band funk. On this disc, as SPIN contributor David Menconi notes in his 8 out of 10 review, MMJ pull “a get-back move, but not of the grasping, lost-nerve/empty-tank variety. Indeed, the reference point is fairly unexpected and audacious: the Who, transposed to a far-off galaxy where James passes frigid nights weaving hazy dreams. Long stretches of Circuital could even pass for an alternate version of Quadrophenia, albeit one heard as a distant echo with the volume turned down to deathly quiet.”

Meanwhile, on Codes and Keys, Washington rockers Death Cab for Cutie trade in the dark, brooding sound of 2008’s Narrow Stairs for eager-beaver optimism, which is most likely due to singer Ben Gibbard’s recent marriage to Zooey Deschanel. Still, as SPIN contributor Mikael Wood writes in his 8 out of 10 review, there’s a compelling tug of darkness underneath Gibbard’s cheer. “Resting at a musical midpoint between Narrow Stairs’ thorny emo-prog and the precise pop of Plans, Death Cab’s latest isn’t all poolside satisfaction,” he writes. “In ‘Some Boys,’ Nick Harmer’s menacing fuzz bass physicalizes Gibbard’s study of the love-‘em-and-leave-‘em type, while the taut ‘Underneath the Sycamore’ opens inside a grisly car-crash nightmare.”