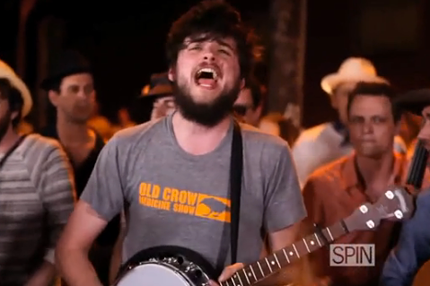 British folk quartet Mumford & Sons have been a remarkable success story over the past 18 months, selling more than a million copies of their debut Sigh No More in the U.S. alone. But none of that would have happened without their frenetic, sweaty, come-on-people-now-smile-on-your-brother live gigs, which helped spread the word. Recently, they teamed up with Edward Sharpe & the Magnetic Zeros and Old Crow Medicine Show for a raucous tour of the Southwest via railroad. Check out SPIN’s exclusive video documentary of the experience.

Filmmaker James Marcus Haney shot and edited the clip for SPIN, and it offers vignettes from the tour, including a look inside their fancy lounge on wheels, plus a rowdy backstage rehearsal of Woody Guthrie’s “This Train Is Bound for Glory,” which the entire ensemble played together onstage each night.

Get videos like these before anyone else each month in SPIN Play, our iPad app for music discovery. Download it from the App Store today.