Former basketball standout gets a jump thanks to his day job and Mos Def. 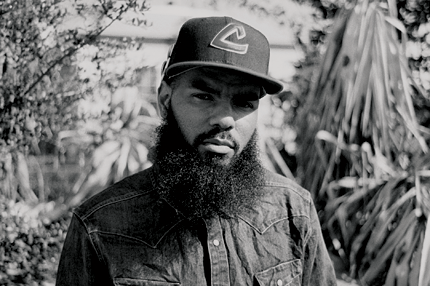 A lot can happen in an hour. Thirty minutes after picking up a finished copy of his demo, recorded in New York City in 2007, Kyle “Stalley” Myricks brought it to the clothing boutique where a friend worked and played it through the store’s speakers. Thirty minutes after that, Mos Def walked in — and liked what he heard. “He’s like, ‘Who’s this?'” explains Stalley, 28. “He asked for a copy. That was the only copy I had!” Smartly, he handed it over. “That put the battery in my back. I was like, ‘Yo, I might be doing something right.'”

It would be a few more years until Stalley, who was recruited to play basketball for the University of Michigan until injuries derailed his career, saw Mos again. In the meantime, he recorded mixtapes, including 2009’s ruminative MadStalley: The Autobiography, which landed him an invite to Damon Dash’s DD172, a Manhattan space that functions as a salon for hip-hop creatives. “The first day I was there,” says Stalley, “it was me, Wiz [Khalifa], Dame, just hanging out till 4 a.m.” One night in 2009, Mos rolled up. After getting reacquainted, he asked Stalley to join his supergroup Center Edge Territory, which also includes Jay Electronica and Curren$y. They plan to release an album later this year.

Right now, though, Stalley’s focused on the solo stuff. His recent mixtape Lincoln Way Nights: Intelligent Trunk Music landed him spots on BET’s 106 & Park and MTV’s Sucker Free Countdown. The nuanced, soulful Lincoln finds Stalley threading woozy beats and Tropicália samples through his laconically delivered relationship anecdotes and novelistic tales of small-town hardship. Major labels have inquired, but Stalley is in no rush to sign. (One Converse designer is such a fan he reached out to make custom Stalley Chuck Taylors, which helps explain the patience.)

Regardless of what his next project turns out to be, Stalley is already thinking about legacy. “I want to be known as someone who took pride in his penmanship,” he says, “and as someone who told great stories.” He’s already got that last part down.
BUY THIS ISSUE
Read the entire June 2011 issue of SPIN, available now for iPad.