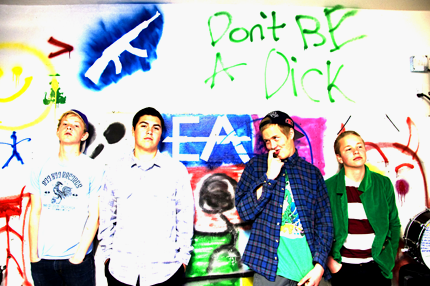 With Billie Joe’s help, Joey and his pals — brothers Max (bass) and Cole Becker (vocals/guitar), and Travis Neumann (lead guitar) — formed a band and recorded their debut LP, Don’t Be a Dick, in just four days at Oakland’s Jingletown Recordings — near the epicenter of the East Bay music scene that birthed Green Day more than 20 years ago.

“The record has a lot of youthful punk rock attitude. They’re raw,” says Billie Joe, who produced Don’t Be a Dick and will release it via his own Adeline Records on June 14. “It’s well played, has great hooks and is catchy as hell.”

Judge for yourself here with SPIN.com’s exclusive premiere of “Broadcast This,” a snappy and simple jam with lyrics that deride the state of radio today: “I don’t want to listen to what’s on the radio / Boring music, depressing talk shows… It would be nice to hear something that I musically enjoy / So I think you want to learn to broadcast this!!!”

Frontman and songwriter Cole Becker (far right) explains the song’s meaning: “‘Broadcast This’ is an anthem of my position against what radio has become,” he tells SPIN. “I was bored out of my mind one day and couldn’t find anything that was worth listening to, so I wrote the lyrics to ‘Broadcast This’ as sort of a middle finger.”

Emily’s Army — a name that honors the Beckers’ 15-year-old cousin Emily, who was diagnosed with Cystic Fibrosis in 1998 — will play select live shows on the West Coast this summer. Check out their complete itinerary here.